People around the world want faster networks and instant connectivity at all times. With mobile devices on the rise and bandwidth-hungry activities like real-time streaming of HD videos, Pokémon GO, the ever-growing IoT, and virtual reality (VR)/augmented reality (AR) platforms, networks are getting choked.

Ecosystem providers are gearing up and making significant investments to deliver a faster network.  Many are touting that we’ll see demonstrations of the 5G network as early as 2018 at the Winter Olympics in South Korea, to be further perfected during the 2020 Olympics in Japan. These major demonstrations will prove to be critical in the overall 5G deployment. Even the U.S. Government is supportive of rapidly building 5G infrastructures, having recently passed the Mobile Now Act.

There are significant challenges ahead, the biggest goal for 5G is to provide 1000x the speed of 4G. In order to deliver such bandwidth to multiple users, it is necessary to direct narrow radio frequency beams to different users or radio channels with highest signal processing gain. Beamforming in LoS (line-of-sight) and NLoS (non-line-of-sight) environments poses major challenges to equipment vendors and service providers, which could be a limiting factor in the successful deployment of 5G. 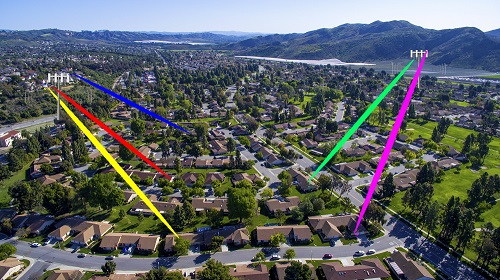 Today, networks deal with a large number of devices by spreading users’ signals over a large cone (typically 120 angle wide). Flooding a large area with signals results in a loss of energy (and connectivity), and leads to signal interference with others. As the number of devices increase, drops in calls and lags in networks are common. The industry needs a solution that will ensure that passengers in cars and trains, or people waiting in airports can enjoy watching HD Netflix videos from their phones and tablets without interruption, and without having to pay higher data bills.

Beamforming uses a concentrated signal that can be aimed directly at the target through the use of transmitters and receivers that use MIMO (multiple-input, multiple-output) technology. MIMO, data is sent and received using multiple antennas to increase both throughput and range. Since beamforming techniques are used in today’s cellular phone standards, it may seem that beamforming or beamsteering of signals to mobile users and IoT devices would be rather straightforward, but it turns out to be the hardest component in the network to implement. The real question is: how can we implement a simple beamforming technology and in integrate it in communication systems operating in different environments where signals can be scattered between and around users?

An optimal solution needs to cost-effectively shape each user’s signal into a very narrow cone, so that energy can be directed toward a specific user’s device to provide the bandwidth needed to support the desired online experience. Such a scenario requires the use of simple and low-cost adaptive antenna arrays such as PARC’s small form-factor Metamaterial Frequency-Adaptive Steerable Technology (M-FAST). The M-FAST is optimal because of its adjustable beam (with very low side lobes), which can be focused and steered in real-time over wide angles and with large bandwidths from 4G to 5G frequencies. This simple architecture and seamless network integration of PARC’s solution offers consumers and service providers:

5G is coming in order to support a massive number of devices that demand more bandwidth at a reasonable cost. One of the key elements necessary for successful deployment will be to integrate antennas with beamforming and steering capabilities as PARC’s M-FAST provides.

Dr Bernard Casse is an Area Manager at PARC.