A Pattern for User Experience Design in Predictive Analytics

A Pattern for User Experience Design in Predictive Analytics

Editor’s Note:  The following is an excerpt from Mike Kuniavsky‘s full article, “A pattern for user experience design in predictive analytics,” now available on The Connective 2.0 presented by WIRED.

One of the most challenging aspects of designing the user experience of predictive analytics is communicating with users what a predictive system is planning to do next, or why it just did what it did. The challenge lies in walking a line between over-communicating, 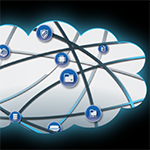 which is annoyingly disruptive, and under-communicating, which makes the behavior of a predictive system appear random and out of control. Effective UX design provides the appropriate amount of communication for the situation and presents it at the right time and in a way that users can act on it. In theory.
In practice the UX of device behavior based on predictive analytics is a complex situation with few best practices, or even examples, available. In the spirit of distilling takeaways from strong design, here are some examples that may point the way toward better UX:

The Nest system is ahead of the pack, having shipped a predictive product used by thousands of people. Specifically, let’s look at the documentation for Nest’s Auto-Away feature, a system that attempts to predict when you’re out of the house so it can switch to a lower-power mode. The premise is simple — it notices you’re out of the house and goes into Auto-Away mode — but even with such a simple premise we can see the hard work put into explaining how the system works.

In their FAQ we can begin to discern a UX design pattern and the problems they’re designed to address:
•    First, the documentation educates customers that the system needs time to learn, and that it won’t work exactly as expected immediately.
•    Then it explains behavior and sets the expectation that the more predictable the house residents are, the more predictable the results will be.
•    It describes what to do when the system makes an incorrect prediction.
•    It prepares users for situations where it won’t work at all, for example when there’s a paired smoke detector and pets in the home (presumably the pets trigger the overhead smoke detector’s motion sensors in a problematic way).
All this for what’s essentially an automatic binary switch.

We can see many of these same principles in earlier predictive systems, such as the recommendation system from Netflix. When Netflix engineers described the UX of their recommendations, they focused on the key qualities of education, explanation and correction. Specifically, they indicated an interest in awareness (that people are aware of the predictive behavior their system is engaging in), explanations that educate people about why a choice was made, and the opportunities for people to adjust the algorithms through feedback. 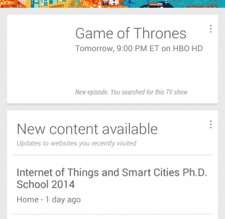 Similarly, if we look at Google Now, another predictive recommendation system, we can see that they broadly follow this same pattern. They try to set expectations in a variety of ways, largely by interactively explaining that the cards displayed are recommendations. They then try to explain how a specific choice was made through small italics below the recommendation, and they allow for the behavior to be adjusted either by swiping the card to one side or by clicking on the three vertical dots in the corner of each card.
Thus, we can start to see an outline for best practices in UX strategy:
1. Expectations: Set expectations by making people aware of the predictive nature of the device, perhaps by including how long it takes for it to learn or adjust.
2. Explanations: Explain or display when a state has changed or a decision has been made based on the predictive algorithm.
3. Affordances: Create clear affordances in the flow of the experience to allow the predictive behavior to be adjusted.
These considerations are by no means exhaustive for successfully communicating the results of predictive analytics, but a comparison of recommendation systems to predictive analytics systems uncovers some valuable common elements that point to a pattern for communicating the boundaries, possibilities and limitations of these systems to their users.