Every hour of every day, people in parking enforcement organizations make hundreds of decisions. … We needed to connect everyone with a kind of digital nervous system to coordinate their activities and decision-making.

Last summer working with the Public Sector and Transportation line of business in Xerox, we launched a product for parking enforcement organizations in Los Angeles and Denver. The launch came after fieldwork, co-design, pivoting with users, prototyping, and implementation. Work is underway on second and third versions. 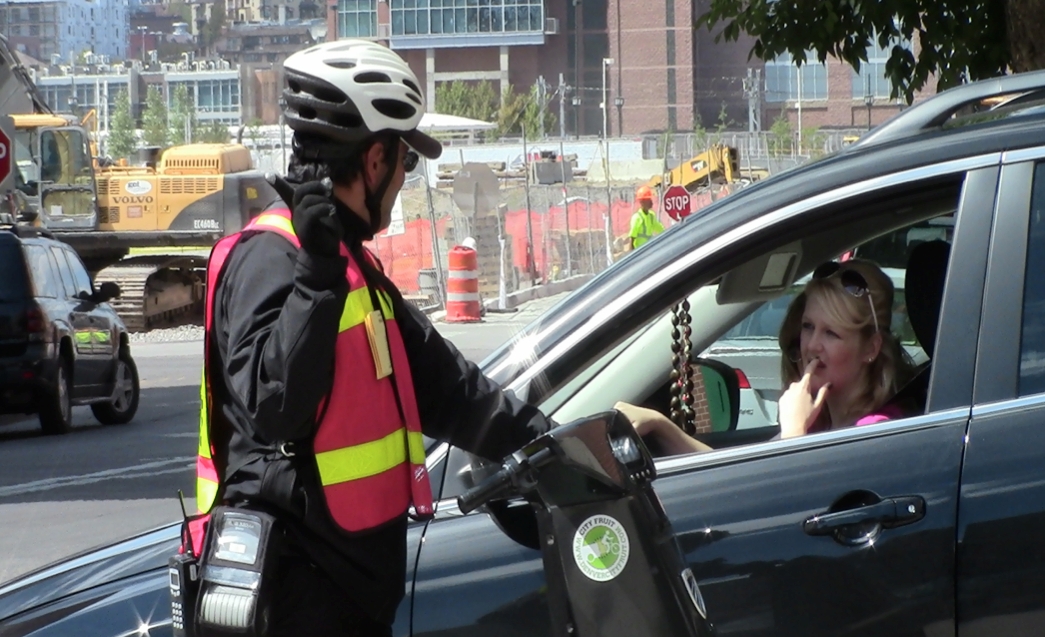 Traffic and parking enforcement organizations direct traffic and manage parking resources. They promote public safety – such as the safe movement of traffic around accidents or fires. They also issue citations such as for vehicles parked without permits or parked overtime, or parked in fire lanes, or under fire escapes. Fees from traffic and parking citations create revenue for cities. The same force of officers works on public safety activities and revenue-bearing activities. There can be a tension in managing priorities, just as there is in other settings, such as hospitals that provide high-quality care and must manage costs.

How do you design a digital nervous system for a distributed human-computer team? How should it combine the thinking of people and computers?

A popular book by Kahneman explains a theory of human cognition in terms of a fast system 1 that records and learns from experiences, and a slow system 2 for thinking through hard problems step-by-step. People use system 1 to react quickly to the environment. System 1 enables us to recognize that a fast moving blotch of color is a threat and to jump out of the way. System 1 has many failure modes that lead to mistakes, especially when we are multi-tasking or relying on personal memories. Alexander Pope said “to err is human.” Today experimental psychology tells us a lot about how, when, and why human cognition makes mistakes. People rely on slow-thinking system 2 to correct mistakes made by fast-thinking system 1.

It turns out that much of the classical AI and optimization technology is akin to system 2, but that computers can do step-by-step reasoning much faster than people can. For human cognition, system 1 and system 2 complement each other and dance together in our thinking. The insight is that overall performance is better by combining complementary and synergistic kinds of cognition. This idea plays out even more in the design of digital nervous systems for distributed human-computer teams.

Over several years we have built computer systems that combine human and computer intelligence, including systems for delivering personalized news, systems for spotting anomalies and preventing cyber attacks, and systems to help design components in manufacturing systems.

Across our applications we have found recurring themes in designing for human-computer teams. For example in parking and traffic enforcement, knowing about past observations and practices of other team members can inform other members in the present – but determining what information is relevant may depend on day-of-week, time-of-day, location, activities of others, traffic conditions, and so on. Sometimes the activities of team members interfere with each other, such as when different officers cover the same area without recognizing it. Team members have different responsibilities that can pull them in different directions – such as dispatchers that are concerned about response times to emergencies and supervisors that work to provide coverage across the assigned areas and optimize overall performance. These patterns lead to challenges in how a digital nervous system fuses information, manages priorities, and helps multi-tasking team members manage attention.

We are discovering patterns of interaction across tasks that lead to specific roles that factor work between humans and computers and respect their capabilities, cognitive limitations and blind spots. Creating effective teams involves managing not only effective real-time interactions, but also managing team memory. Some new roles support team memory and learning such as tagging observations to create training examples for machine-learning algorithms, and curating the training examples.  Other roles support real-time performance – such as attention-management support for officers and also attention management for supervisors and managers who oversee teams.

New Theories: The Rise of CENTAURs

We are not alone in creating human-computer teams. For example, systems from eBay, Google, Uber, Airbnb, Netflix, Amazon, combine and coordinate the activities of people. Our work focuses on applications where the users know that they form a team and have common goals.

Human-computer teams have also been created for solving protein-folding problems and playing in new kinds of chess tournaments. Over the last few years, the highest performing “players” in chess changed from human chess masters, to sophisticated artificial intelligence programs, to teams of humans and computers that combine human and computer intelligence and sweep the “free-style” tournaments with their formidable play. In human-computer teams, computers are faster at generating and testing moves. They are systematic and tireless and avoid simple errors. Qualified human players manage the attention of the team to spend more time on the richest parts of the search space. This approach combines fast human-system-1 thinking with fast computer-system-2 thinking to beat all comers. One influential and readable analysis is Gary Kasparov’s review of human-computer teams playing chess. These systems are called Centaurs. The success of human-computer teams in chess and in other applications has spawned questions about how to best design Centaur systems.

Chess takes place in a “closed world,” where the rules are fixed and the nature of a solution is fixed. Real-life problems are called “open worlds,” because new rules are discovered or invented. Open world problems are more realistic and more difficult. Teams must acquire or learn knowledge, and adapt to succeed. An example of solving an open world problem is the introduction of the iPhone by Apple. That product did not play by the rules of the ongoing game. Its breakthrough design obsoleted the competing designs overnight.

The chart summarizes differences and advantages in human and computer cognition on open world problems. 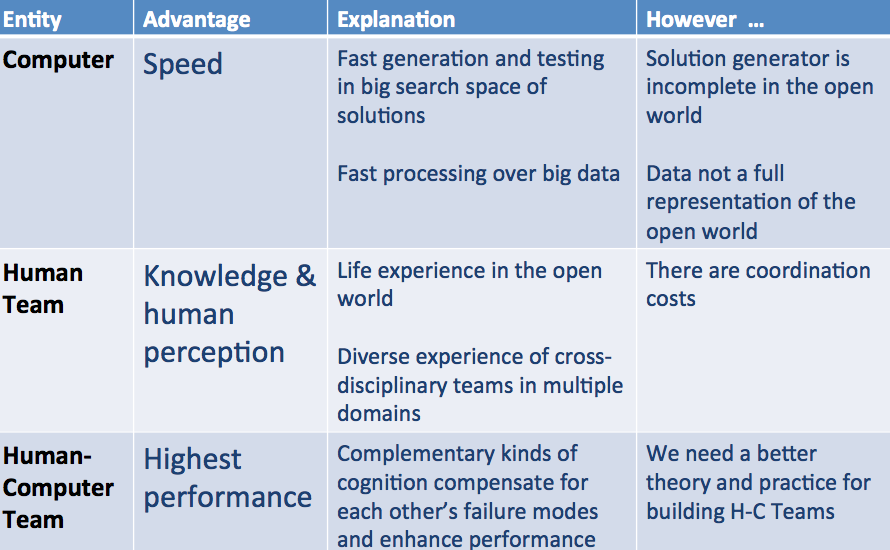 Human-computer teaming has now attracted the attention of the U.S Military both in terms of research programs at DARPA and as an integral part of the pentagon’s third-offset strategy for military advantage.

Towards a Theory of Human-Computer Teams

CitySight®, the product we created with Xerox, helps parking and traffic enforcement organizations manage and optimize their operations. In movie-speak, we might say that it is “Analytics meets Workflow”. CitySight is part of the great tide of systems using Big Data. The CitySight dashboard shown is of the city of “Almost Hollywood.” It shows sanitized data from Hollywood, California but with the officer and squad names changed into movie-related names and a fraction of the citations removed.

This post described how our practice on projects like CitySight led us to contribute to theories of cognition for human-computer teams.

But what about emotion?

CitySight® is exceptional in the large number of people focusing on shared goals. What motivates people to want to help an organization succeed? The challenges of human motivation are the subject of the next post in this series.

My group at PARC is called TAO, which stands for Theory and Technology for Agile Organizations. We design and implement web services that help organizations optimize their activities, using mobile and cloud technology. Thanks to the CitySight team and our partners for all of the discussions and design that informed this project. Thank you to Matt Darst, Hoda Eldardiry, Lawrence Lee, Bob Krivacic, and Raj Minhas, Sai Nelaturi, Mudita Singhal, and Barbara Stefik for comments on earlier versions of this post.