Two days after I decided to lease a Chevrolet Volt plug-in hybrid electric vehicle (EV), I received an internal email announcing that PARC would be installing charging stations in the parking lot for employee use. My first reaction was, “That’s great! Perfect timing.”

Pretty soon, though, the user experience designer in me kicked in and I realized that company charging stations raise some interesting social issues, and I thought about how technology could be used to address them. The EV charging stations have been in use for over two months now, and I’ve been informally collecting data and considering the implications. 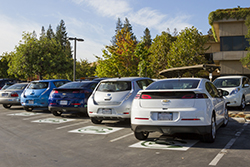 There are eight charging spaces, available on a first-come first-served basis. That’s the easiest policy since it doesn’t require any enforcement. Initially, 11 people registered as EV owners with the facilities folks, and the number has since grown to 16. So far, things seem to be working fairly well (or at least I’ve been able to get a spot most days). But as more people start to use the spots, I wonder, how might you want to evolve this policy?

Several of us have been talking about a reservations system, and that has me wondering how to design it. It might not make sense to have a first-come, first-reserved policy, but rather one based on priority. Maybe pure EVs (battery only) should have priority over hybrid EVs that can rely on gas. But Teslas are pure EV and yet have a range of 200-300 miles, so do they get priority? Maybe employees who live further should get priority. I know one person who lives 40 miles away and he bought a Nissan Leaf, with a range of about 80 miles. That’s cutting it close! I worry for him, so I think he should get priority. But then, I’ve heard a rumor that some people aren’t even charging at home, only at work. Probably they shouldn’t get priority. Maybe I’m making this too complicated and there shouldn’t be a notion of priority at all.

Even if a reservation system treats all cars the same, there are other policy decisions. People have regular schedules, so you might want to allow people to sign up on a continuing basis rather than every day. But then people have to remember to cancel their reservation when they’re offsite, which many will forget to do. Do you require a daily confirmation? How far into the future can you reserve? As new people buy EVs, they need a shot at reserving spots, so it can’t be too far out. 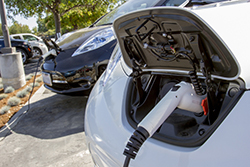 Then there’s the issue of sharing spots. Even though the spots are 120 V Level 1 charging stations (or “trickle chargers”), sometimes that’s enough to fully charge the battery by mid-day. At that point, the car is taking up a charging station. So far, we have not developed a convention of moving our cars. Moving it means interrupting your work and possibly moving to a space much further out, so if you don’t know that someone else needs the space, there’s no incentive to move. Yet if we knew that someone was waiting, I bet most of us would happily move.

PARC is handling this informally through a new email distribution list for EV owners, which is an easy if imperfect solution. People have emailed the group to ask if anyone could move once they finished charging, and each time several people quickly volunteered. But once, when the person in need went to take the spot at the agreed-upon time, someone else had already taken it. The next time someone asked, I arranged to meet the person so we could coordinate her getting my spot, but it turned out another spot had already opened. I still moved my car to free it up for others, but at the end of the day it was still open. That made me less inclined to move next time. But what about when you return after an off-site meeting? An email list isn’t a practical solution in that case.

If you want people to move, you need an incentive. Maybe you create one by charging for use. That’s not in the spirit of offering an employee benefit, but maybe charging just a token amount is enough to nudge people. Or maybe the spaces are free only while the car is charging.

There are other social issues involving non-EV owners. They might be wondering, “Why should PARC subsidize other people’s fuel expenses but not mine?” Not only that, “Why do the EV cars get to park so close to the employee entrance?” Probably it was easier to install the charging stations closer to the entrance, but even those who don’t mind not getting the subsidy might not like having to park further out. One non-EV owner I spoke with laughed at himself for both supporting the company’s effort to encourage electric vehicles and simultaneously resenting those spots as he walks by each morning. One way to think about this is that the charging stations are just one of many benefits PARC offers its employees, not all of which provide equal value to all employees. The thing is, this one just happens to be highly visible to those who aren’t getting the benefit.

Many of these issues are interesting because they are unique to a company setting where there is a sense of community and people can communicate directly, even if they’ve not met before. In an earlier PARC project, some colleagues and I conducted ethnographic studies to study the idea of reserving on-street parking in cities. Our observations indicated that reservations are fraught with emotional issues – people don’t trust that their reservation will be honored, they worry they won’t have recourse if someone takes their spot, they don’t like the idea of seeing open spaces that aren’t available to them, and so on. We had ideas about enforcing reservations with payment schemes and technology solutions, but in this setting the solutions can – and maybe even should – rely more on social conventions. You don’t want to set up an adversarial relationship among employees, and it may be an opportunity to build a sense of community through trust-based policies.

As if all of this weren’t interesting enough, PARC is planning to add two Level 2 (240 V) charging spaces soon, which charge roughly four times faster and so can charge up several cars in a day. Once those are installed, things will get even more complicated. Not only that, the fast chargers will be in the upper parking lot and the trickle chargers are in the lower lot, so soon parking is going to involve a little tour around the building.

So far I’m very happy with my Volt, if only because it has given me such interesting thoughts to ponder (as I cruise along in the carpool lane). I’m hoping to do a formal ethnographic study on company-sponsored EV charging, but until then, I’m interested to hear about others’ experiences charging (or not) at work.

We invite your comments below.