(and vs. All Other Such Paradigms)

The perils of definition

Is ubicomp a superset or subset of <buzzy paradigm>? A fair question, but I’ve hesitated to propose a formal definition because they’re:

For the most part, I don’t find formal definitions useful; you can call it whatever suits your fancy. All that matters is that I understand what you mean when you use a term and that you understand what I mean when I use it (whether we use that term in the exact same way or not is immaterial). So, here’s what my colleagues and I generally mean when we talk about ubicomp.

The attributes of a definition that carry lasting meaning are not technological properties (performance, cost, size, distribution, latency), but the core capabilities that the paradigm enables for usage. 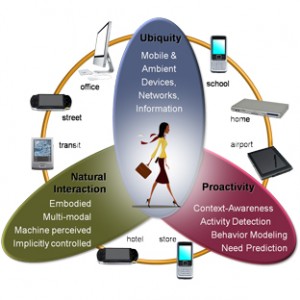 Ubiquitous is the property of being or seeming to be everywhere. Its synonyms: omni-present, pervasive, everywhere, universal.

Usefulness is actually a pretty important attribute of Ubiquitous Computing (or “ubicomp”). Just as the sound of the proverbial tree falling in the woods only matters when someone is there to hear it, the act of computing only matters when it is of use to someone. Usefulness differentiates ubicomp from terms like “artificial intelligence” or “ambient intelligence” or “smart environments” — where the intelligence or smartness could, theoretically, exist for its own sake, not necessarily for the usefulness of others or those in an environment.

So what’s the difference between Augmented Reality and Ubiquitous Computing?

Getting back to the question, Augmented Reality (like “mobile computing” as described above) is neither a subset or superset of Ubiquitous Computing.  Augmented Reality (AR) is the presentation of electronic information along with a real-world object, projected physically or as seen through an electronic display. Ubiquitous Computing (ubicomp) is the seamless integration of information services as we accomplish goals throughout our work and personal lives.

BOTH have to do with the use of information services in conjunction with real-world objects.
BUT one is about perceiving “reality”, and the other about the usefulness of the “computing” to our goals.

The key point of overlap, and the source of confusion to some, is that both AR and Ubicomp utilize machine perception to detect the state of the real world. AR systems typically use cameras, GPS, and electronic compass to detect the location and orientation of physical objects relative to each other. A Ubicomp system may also employ those same sensors along with others such as switches, thermistors, microphones, chemical detectors, strain gauges, accelerometers, and more. Such sensing technologies enable machine perception that is approaching the fidelity of human perceptions — of temperature, sound, sight, smell and taste, proprioception, balance, and motion,  respectively.

Cutting to the chase,

In essence, Ubicomp research focuses on the use of information services throughout our everyday lives, which might include an AR-style of interaction. In that sense, Ubicomp might seem to cover everything; but then the term “Ubiquitous Computing” would be no more meaningful than “Computing” in general.

For PARC, ubicomp is not a superset or subset of anything, but deals with what exists in the interstices of other computing paradigms and research areas. For me, this includes:

More about these some other time.