Eight Essentials for Scaling Up Without Screwing Up

Eight Essentials for Scaling Up Without Screwing Up

By Robert I. Sutton, Stanford University

Editor’s Note:  We look forward to welcoming Robert Sutton to PARC Forum this Thursday, February 20.  Register today and join us for “Scaling Up Excellence.”

Back in 2006, my colleague Huggy Rao and I launched an executive education program at Stanford called “Customer-focused Innovation.” Mornings consisted of lectures and case studies in a traditional classroom in the Stanford Business School; this was the “clean models” part of the program. In the afternoons, we moved the group to the (then) new Hasso Plattner Institute of Design, or “Stanford d.school,” for the “hands on” part. That midday transition could be jarring. The d.school was in a crowded, messy, and rather run-down double-wide trailer in those days. And then there was the fieldwork. That first year, the d.school team (led by Perry Klebahn) sent the executives out to observe and interview customers in BP gas stations. Their assignment was to prototype solutions to problems they heard about, revise them in response to user feedback, and then present them to a demanding group of BP executives.

For our part, Huggy and I were also hearing about problems every day  – our students’ – and we got the idea to start working on our own prototype solution. We noticed that, no matter what we asked those executives to do – discuss a Harley Davidson case study, come up with ways to kill bad ideas, design solutions to improve that gas station experience – they came back to the same gnawing concern. Maybe it was somewhat hard to come up with a good, new solution, but the really hard thing was, once they landed on that better way, to get it to spread. This was the challenge that pervaded their comments and questions.

They described it as the biggest obstacle to building a customer-focused organization. The executives could always point to pockets in their organizations where people did a great job of uncovering and meeting customers’ needs. There was always some excellence – there just wasn’t enough of it. And what drove them crazy, kept them up at night and devoured their work days, was the difficulty of spreading that excellence to more people and more places. We started calling it the Problem of More.  They usually described it as the challenge of “scaling” or “scaling up.” And they emphasized that the problem wasn’t limited to building customer-focused organizations; it was a barrier to spreading excellence of every stripe.

So Huggy and I started taking a harder look at scaling as a class of problems that might be addressed by a common toolkit. We examined the Problem of More as it was faced by a wide range of organizations: Google, Facebook, the Girl Scouts, Kaiser Permanente, Brigham and Women’s Hospital, Procter & Gamble, JetBlue Airlines, Wyeth Pharmaceuticals (now part of Pfizer), Taj Hotels, IKEA, the Transportation Safety Authority (TSA), start-ups including Citrus Lane, Pulse News (now part of LinkedIn), and Bridge International Academies (a for-profit chain of nearly founded in 2007 that now operates some 200 highly standardized schools for poor children in Africa), and on and on. And once people heard we were trying to make headway on all this “scaling stuff,” they gave us their ideas – and peppered us with more tough questions. 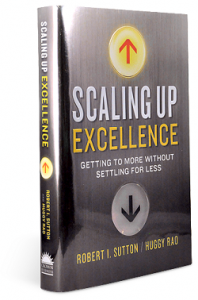 Thus went the seven-year exercise in iterative prototyping that resulted in Scaling Up Excellence: Getting to More Without Settling for Less. The same common themes popped up again and again — and led us to identify the key beliefs, skills, and actions that are hallmarks of effective scaling. And to sum all this work up in the fewest words, here they are:

1.  Understand that you are spreading a mindset, not a footprint. Scaling requires instilling the right beliefs and behaviors in people, not just running up the numbers as fast as you can.

2.  Approach scaling as a problem of both more and less. As an organization or program expands, traditions, strategies, practices, and roles that were once helpful outlive their usefulness, creating friction and frustration. They must be streamlined or eliminated.

3.  Consider where you want to be on the Buddhism-Catholicism continuum. That is: do you concentrate on making people true believers, then let them localize the rituals as much as they like – or do you legislate the behaviors you’ve identified as best, assuming they’ll act their way into a state of believing?

4.  Link hot causes to cool solutions. Making a rational argument for a change isn’t usually enough to instill a new mindset and unseat old habits. The most effective campaigns stir up “hot” emotions in people (pride and anger are especially effective) and then channel that energy and passion into “cool” (clear and step-wise) actions.

5.  Connect people and cascade excellence. Exposing people to a conference, a few speeches, or a bit of training isn’t enough to fuel scaling. It requires building or finding pockets of excellence and, in turn, using them to guide and inspire the creation of more such pockets.

6.  Cut cognitive overload, but embrace necessary organizational complexity. As the cast of characters in an organization or program grows, coordinating all those people and sustaining healthy social bonds among becomes more difficult. The trick, and it is a difficult one, is to add just enough complexity so that people can do their work, but not so much that “they feel as if they are walking in muck” as Twitter’s SVP of engineering Chris Fry puts it.

7.  Build organizations where people feel “I own the place, and the place owns me.” Scaling starts and ends with individuals. Effectiveness spreads and sticks when people feel obligated to live the right mindset and equally compelled to hold others to the same standards.

8.  Go from bad to great. To clear the way for excellence to spread, the first order of business is to clear away destructive beliefs and behaviors. Indeed, a big pile of academic studies and business cases show that “bad is stronger is stronger than good.”

Many of these lessons, Huggy and I would be the first to admit, could be books in themselves – and all deserve their own blog posts. In fact, the hyperlinks in the list above indicate topics about which I’ve already written on HBR. I’ll try to cover them all eventually, so check back from time to time. If you’re like most of the managers I’ve met since 2006, you are probably knee-deep in the challenge of identifying excellence and spreading it to more people and places – and we can all keep learning from each other.

Robert Sutton is Professor of Management Science and Engineering in the Stanford Engineering School, where he is co-director of the Center for Work, Technology, and Organization, cofounder of the Stanford Technology Ventures Program, and a cofounder and active member of the new “d.school.” His new book, with Huggy Rao, is Scaling Up Excellence: Getting To More Without Settling For Less.

Editor’s Note:  This article originally appeared on the Harvard Business Review Blog Network and can be seen here.  Reprinted with permission.