Wow. For a nerd like me, the ARPA-E Energy Innovation Summit that took place in Washington, D.C. recently was a candy shop. If you couldn’t be there (or even if you were!), read on for what I consider the most noteworthy morsels from the event… 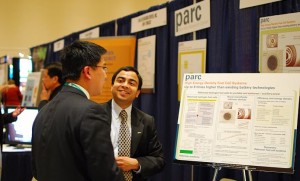 But first: What’s an ARPA-E?

Organized by the the U.S. Department of Energy’s Advanced Research Projects Agency – Energy (“ARPA-E”), the inaugural Energy Innovation Summit brought together key players to spur the networks that will, according to the organizers, “bring about the next Industrial Revolution in clean energy technologies, in the way the U.S. has led previous revolutions in life sciences and information technology”.

There are also some great writeups about ARPA-E’s mission (through interviews with Director Arun Majumdar), here: 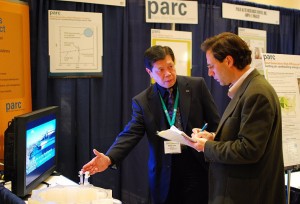 My take: The technology showcase

The Transformational Energy Technology Innovation Showcase (I didn’t call it this, they did) was fantastic — everything from zaney new wind turbines to quantum tunneling thermal energy converters. [FYI, here’s a list — with links to downloads — of what PARC shared in the showcase.]

Overall, the showcase displayed a diverse creativity that I found truly inspiring. Here’s a quick rundown of what I found noteworthy:

Photovoltaics (PV). Surprisingly (or not, given how saturated the space is) there were only a few things I saw on PV devices. We showed one idea on using laser ablation to make point contacts [PDF] — but we didn’t really emphasize it, given that the work is already funded by the Department of Energy, and honestly it’s more of an incremental improvement to silicon PV technology. While our technology is important in driving down manufacturing costs and increasing efficiencies, the mission of ARPA-E is to focus on the truly bold, new ideas. Meanwhile: there wasn’t much novel thin-film PV work visible at the meeting. That seems right to me, given how many companies are already awash in VC funding ($100M+) with the goal of making CdTe and CIGS a reality.

And Thermo-photovoltaics (TPV). Then there is the quantum-tunneling approach to TPV. Now this is a really cool idea: couple evanescent waves from the heat of a blackbody by placing a TPV receiver only a gnat’s eyelash away (at 100 nm). This way, you can extract more energy than the blackbody radiation law would seem to allow. It should work because within the evanescent field, you’re taking advantage of coupling to NON-radiative modes. But the big issue is how to maintain a very, very small gap over macroscopic areas. IF that can be done, the approach looks very interesting.

Wind power. I’m actually really impressed by the scale achieved by wind turbines made by companies like General Electric. So I have to wonder if some of the seemingly wacky ideas around wind capture that I saw at the showcase will, er, fly (pun not intended). Especially because I believe wind technologies should increasingly lower cost through manufacturing improvements and economies of scale. It’s not just the cool factor but the technology adoption that matters.

CO2 conversions. There were a number of ideas around converting CO2 to liquid fuels (including our own). In fact, there were specific ideas that would require high-pressure, pure, CO2 — which is exactly what the PARC air capture process produces [PDF]. From a partnering perspective, I think this is a solid opportunity where the sum of the parts might be much more interesting as a whole.

Thermoacoustic cooling. Wrapping up the list, the showcase displayed PARC technology on thermoacoustic cooling [PDF]. Another very interesting idea, although I’m admittedly biased. [The technology was also mentioned or covered by Technology Review, Greentech Media, and Scientific American. Nikkei Electronics too, though I can’t read Japanese.] How it works: it uses thermoacoustics (high intensity sound waves to drive heat), but we have added some proprietary ideas to make it more efficient than what has been possible before at near-room temperatures. The result would be an air conditioner that is 2X more efficient (a COP as high as 9) than conventional compressors. Huge market.

If you were at ARPA-E, or simply interested in these technologies, we’d love to hear your thoughts…