Editor’s note:  In this two-part series, we will take a closer look at the basics of PARC’s CoEx technology. 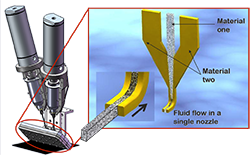 At PARC today, as we continue to tackle “hard” technology problems, some folks may wonder why we focus on energy issues. After all, although energy clearly provides a set of “hard” problems to solve, what do energy technologies have in common, from a technical perspective, with the office of the future? Quite a bit, as it turns out. Printing, in particular, has spawned one of the key technologies in our energy portfolio.

PARC’s printing history is rich and storied. Of course it’s well known that we invented the laser printer, but we also developed competencies in inkjet printing technologies. And whether we were working on laser printing or inkjet printing, control of material deposition was a foundational core competency. So how do printing and energy go together? It can be hard to imagine. But a PARC scientist had an “a-ha” moment while brushing his teeth – with his striped toothpaste. Seeing the three colors side-by-side, he realized the potential of printing multiple materials at once, providing greater flexibility in structuring thin materials.

The result of this inspiration is our now patented Co-Extrusion technology, familiarly known as CoEx. The idea is that you actually squeeze paste – coincidentally a lot like toothpaste – out of a print-head nozzle. But you don’t squeeze just one, but two or more different materials at the same time. This could include anything from metals to ceramics to polymers.

CoEx works because the materials are so viscous and thick, they don’t mix at all – they actually shape each other. This enables the creation of microstructures. In the case of solar cells, silver particles are suspended in an epoxy resin which is printed between stripes of a sacrificial polymer. After printing, the silver stripes are sintered, and the sacrificial polymer is burned away, leaving high aspect-ratio silver gridlines that perform better than those produced via screen printing.

CoEx is also being applied to batteries, as a method of printing structured battery electrodes or as a way to print an entire battery in a single pass. These applications not only leverage the existing active pastes that battery manufacturers use today, but also provide opportunities for improvements in battery performance that have been so difficult to achieve in the industry. As we all know, batteries are an incredibly important market to tackle right now, as electric vehicles are finally becoming more and more mainstream and the requirement for better battery performance is well understood by consumers and battery manufacturers alike.

In the second part of our series, we will explore why using CoEx to produce structured battery electrodes holds such potential for battery manufacturers.

You can find out more about our CoEx technology by downloading the Information Sheet below.