The public reporting on artificial intelligence (AI) systems is usually about their increasing capabilities. A less reported trend is that many of the most powerful systems being developed today combine artificial and human intelligence. Such systems are called Centaurs – after the half-human, half-horse creatures of Greek mythology.

Within the AI research community the significance of centaur systems — or human-machine teams — came to international attention a few years after World Chess champion Gary Kasparov’s review of human-computer teams playing chess. His review started a considered examination about the different cognitive capabilities of humans and machines and why the combination of both sometimes led to performance that beat not only people but also the most powerful artificial intelligence systems.

Most people expect that today’s computer systems are faster than human thinking, especially for working through vast amounts of information or for rapidly carrying out repetitious tasks. But there are also recognizable limitations of computer thinking. Many of today’s challenges take place in “open worlds,” situations where unexpected and new kinds of things can happen, in contrast to the “closed worlds” that characterize situations such as a chess game. On examination, the reasons for the dominance of centaurs is not mysterious. The chart summarizes differences and advantages in human and computer cognition on open world problems. 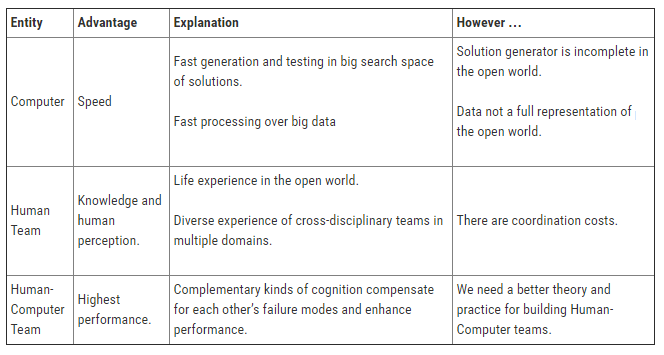 Computers are less capable than people when life experience matters. Typically, computer programming reflects a fixed set of assumptions about the world. Even with today’s powerful and deep machine learning approaches, computers typically react poorly in situations different from those where they have been trained. People draw on a lifetime of experience and the common sense and bring that to the centaur team.

Human-computer teaming has attracted the attention of the U.S. military, both in research programs at the Defense Advanced Research Projects Agency and the Pentagon’s third-offset strategy for military advantage.

In our research, several applications have been prototyped or delivered to our customers that enable human-computer teaming – drawing on the complementary strengths of human and computer teaming. Examples include systems supporting overworked and multi-tasking nurses in hospitals, systems for spotting anomalies and preventing cyber-attacks, and systems to help design components in manufacturing systems. In transportation, centaurs are being developed for systems that team up with traffic enforcement officers helping them to balance their workloads, making enforcement more effective and helping agencies better accomplish their primary mission – ensuring public safety.

For the rest of us, you can expect to see artificial intelligence systems showing up on the job to enable teams to perform better than they ever did before. You may not need to take a computer to lunch any time soon, but the odds are that many people will find themselves working closely with computers as partners on the job in the next few years.