Here’s Why You Need to Build Your Innovation Capability

Here’s Why You Need to Build Your Innovation Capability

Competitive Advantage is Dead. Or at Least Dying. 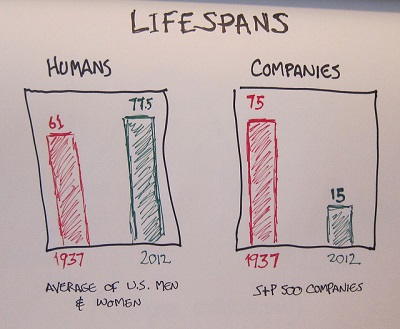 The drawing is by Jay Cross from the Internet Time Alliance, based on data from Richard Foster and Sarah Kaplan’s book Creative Destruction and work from the Deloitte Center for the Edge.  It shows that while average U.S. lifespan has increased by sixteen years from 1937 to 2012, over the same period of time, the average time that firms remain in the S&P 500 has fallen from 75 years to 15.

That boggles my mind.

Now You Have to Innovate

McGrath argues this competitive advantages are still important, but that now they are transient rather than sustainable. And in that environment, we need to innovate. She uses Sagentia as one of the case studies in the book (which is well worth reading), and says this:

“At Sagentia, innovation is clearly at the top of the agenda, throughout its operations. As one senior executive noted, ‘Inherently, companies like ours are super agile, because we are not in control of our own destiny … We can only live off something that our clients have decided to do.’ This makes Sagentia a model for where more and more businesses are headed—as competitive advantages shorten and competition comes from everywhere, increasingly firms are in the same position, that is, ‘not in control of [their] own destiny.’ Consistent, ongoing innovation and extraordinary closeness to customers is the only possible response.”

This raises a pretty interesting point – as competitive advantages weaken, we have less control over our own destiny. In other words, we need to get more comfortable with uncertainty.

How long will it take to build your consistent innovation capability? McGrath says two to three years. That’s why you need to be working on it now, if you aren’t already.

Steps You Can Take Right Now

In addition to building your organization’s innovation capability, you also need to build your own skills in this area. Here are some steps that you can take right now to start:

1.)  Think about how much you can get away with – if you manage a budget, how much discretion to you have? If you don’t have a budget, what are the parts of your job that you control?
2.)  Make a list of 10 things that you can do within the current scope of your work that will make things better for the people with whom you interact – customers, co-workers, bosses, whoever.
3.)  Do those things.
4.)  Figure out which ones worked, and do those more.
5.)  Figure out which ones didn’t work, learn why not, then forget about them.
6.)  Apply what you learned to the next set of ideas.
7.)  Go back to step one.

I’ve always been skeptical of “everything is different now” type arguments. But there’s a fair bit of evidence accumulating that the pace of business is changing. The boundaries of your industry probably are, and your competitors probably are too.

To meet these changes, you have to change yourself. That means you have to able to innovate.  It’s a core skill these days.

Editor’s Note:  This article originally appeared on Tim Kastelle’s “The Discipline of Innovation” and can be viewed here.