By Robert I. Sutton, Stanford University

Editor’s Note:  We look forward to welcoming Robert Sutton to PARC Forum tonight, Thursday, February 20.  Register and join us for “Scaling Up Excellence.”

I was raised to view hierarchy as a bad thing. My late father, an entrepreneur, often ranted about the idiocy he battled in the corporate and government bureaucracies that made life difficult for his little company. He loved the Peter Principle because, to him, it explained why so many organizations were packed with people who had risen to their level of incompetence. Perhaps because of my upbringing, I have always been drawn to arguments – such as management guru Gary Hamel makes – that “bureaucracy must die” and that top down control is “toxic.”

Given my ingrained biases, I was taken aback by my own answer a few months ago during an interview with McKinsey partner Rik Kirkland (he leads “global publishing” and, before that, was the editor of Fortune for years). Rik was interviewing me about Scaling Up Excellence, the book that Huggy Rao and I have coming out in February. Rik closed the interview by asking what I learned from our scaling research that surprised me most. I immediately said something like “I have always despised hierarchies in my heart, but this research taught me that they are good and necessary – of course some are good and others are bad, but spreading and sustaining excellence depends on having an effective pecking order.” As I told Rik once the filming stopped (it was a video interview that will appear on the McKinsey Quarterly site in a few weeks), I was surprised to hear my own answer to his question about surprises!

Huggy and I reached this conclusion for two main reasons. I still feel a bit ambivalent about it, but the evidence is overwhelming:

1. Hierarchy is inevitable. As our Stanford colleagues Deb Gruenfeld and Lara Tiedens show in their detailed review of research on hierarchy, although the forms it takes vary wildly, it is impossible to find groups or organizations where all members have roughly equal status and power. Whether researchers study people, dogs, or baboons, hierarchies are evident after just minutes of observation. And when strangers meet for the first time, a hierarchy of leaders and followers begins to emerge immediately. This rapid development of pecking orders is seen, for example, in groups of college students who meet in psychology experiments and when strangers start chatting on the street corner – leaders, followers, and other signs of status differences nearly always emerge (along with more subtle roles such as “joker,” “hero,” and even “scapegoat”).

Gruenfeld and Tiedens conclude: “When scholars attempt to find an organization that is not characterized by hierarchy, they cannot.”

Organizations that are celebrated for their lack of hierarchy may downplay and reduce status differences, but they always have some people with greater formal and informal power than others – and associated pecking orders. And eliminating titles such as “manager” or “supervisor” doesn’t make the hierarchy disappear. For example, there has been a lot of talk lately about Zappos’ ongoing reorganization into something they call a “holacracy.” Some headlines suggest that the company is getting rid of bosses – that isn’t quite right. While more power is being pushed down the hierarchy, it persists under the new structure. More responsibility is being placed as people are moved into “circles” (which sound much like self-managing teams). Yet even though they have stopped using the word “manager” for many roles, there are still be people who perform what sound like middle management roles to me: They are responsible for staffing teams and dealing with employee performance issues. And, while Zappos is getting rid of a lot of titles, note that Tony Hsieh is still called the CEO.

Hsieh may delegate and empower people more than many CEOs. But Wired’s cute claim that he is “the boss that isn’t” strikes me as somewhat misleading. As I discussed with Jena McGregor when she interviewed me for the Washington Post article she wrote on the change, Hsieh is using his power and position at the top of the pecking order to institute the new structure (which seems like a good idea, at least based on what I learned about it). In fact, this kind of claim that an organization is non-hierarchical because the top dog wields his or her power to push greater responsibility and accountability down to lower levels is also seen in hype about other companies including IDEO and W.L. Gore. Yes, when people are given decision-making power and have the requisite confidence and skills, leaders do not need to monitor or coach them as closely – but there is still a hierarchy and certain people have more decision authority than others.

Gruenfeld and Tiedens report that even the chamber orchestra Orpheus – which is celebrated for having no conductor – appoints a different member as “concert master” for each piece of music played. And the founder and president of Orpheus has “full control over the nature of the program, including what set of pieces are played.”

Similarly, as we showed in Scaling Up Excellence, open source software projects are sometimes ballyhooed as non-hierarchical because “products such as Mozilla’s Firefox browser are based on code written and tested by thousands of volunteers” who “often spread such software with little oversight, and the development process is remarkably transparent to everyone inside and outside the company.” Yet Mozilla’s hierarchy and roles include “module owners,” “super-reviewers,” a “release management team,” and two “ultimate decision-makers.” The two people at the top, Brendan Eich and Mitchell Baker, are described as “benevolent dictators.”

In short, if you can find a group of people (or dogs or baboons) without a hierarchy, I want to hear about it. Yes, power and status differences are sometimes reduced, but hierarchy is a fact of organizational life.

2. Organizations and people need hierarchy. While there is no doubt that some hierarchies are better designed than others, an interesting test is what happens when there is little or no consensus about who has more — and less — power. Gruenfeld and Tiedens describe a series of studies showing that when such agreement is absent (so the nature of the formal or informal pecking order is not clear), members become less committed to their groups, less productive and effective, dysfunctional competition for status emerge, and coordination and cooperation suffer. 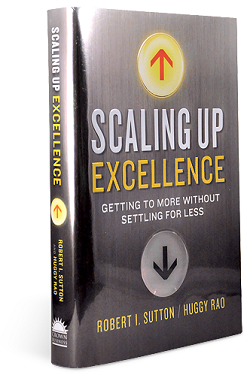 Another interesting test is what happens when layers of management are removed in a company? Certainly, some organizations have too many layers, but some quite famous founders have discovered that they need intermediate layers – even though they long for the good old days when it was just them and a small team. Google’s founder and CEO Larry Page is exhibit one. As we wrote in Scaling Up Excellence:

“Page has been described as ‘obsessed with making Google work like a smaller company.’ In 2001, when Google grew to about 400 people, Page decided that middle managers were creating complexity and friction – symptoms of John Greathouse’s ‘Big Dumb Company Disease.’ So he got rid of all of them. More than 100 engineers reported to a single overwhelmed executive. Frustration and confusion was rampant. Without those middle managers, it was nearly impossible for people to do their work and for executives to grasp and influence what was happened in the company. Page learned the hard way that a hierarchy can be too flat and that middle managers are often a necessary complexity.”

The upshot is that, as you scale an organization, getting rid the hierarchy – or even assuming that a flatter one is better – is the wrong goal. Your job is to build the best hierarchy you can. I end with two points to spark the conversation here on LinkedIn about the hallmarks of effective pecking orders.

First, Mark Templeton, CEO of the software firm Citrix, makes a lovely argument about the difference between the need for hierarchy versus how people ought to be treated. We quote something he said in The New York Times in Scaling Up Excellence:

The second point comes from Chris Fry, one of the scaling stars in our book. Chris now heads engineering at Twitter. But our interviews and informal talks with Chris, and his colleague Steve Greene (who has joined him at Twitter), focused mostly on lessons they gleaned from growing Salesforce.com’s software development organization from 40 to 600 people. Chris has an intriguing saying that is objectively wrong (or at least self-canceling). Yet in another way, it is exactly right: “The job of the hierarchy is to defeat the hierarchy.”

When Chris explains why he says that, you realize there is much wisdom in the weirdness. The self-cancelling silliness reflects the ambivalence about hierarchy that so many of us still can’t quite shake. There is also a paradox: if you actually wanted to defeat a hierarchy, you would probably have to use the hierarchy itself to do create such anarchy. His core argument, however, is that a well-managed hierarchy is among the most effective weapons for getting rid of the friction, incompetence, and politics that plague bad organizations (and that my father despised so much). In short, a more accurate – but less interesting way to reword Chris’s saying is “the job of hierarchy is destroy bad bureaucracy.”

The sentiment and substance of Mark Templeton’s and Chris Fry’s advice strike Huggy and me as just the right mental provisioning for leaders and teams that are charged with scaling excellence as an organization changes, grows, and ages.

What do you think? What are the hallmarks of effective hierarchies?

Robert Sutton is Professor of Management Science and Engineering in the Stanford Engineering School, where he is co-director of the Center for Work, Technology, and Organization, cofounder of the Stanford Technology Ventures Program, and a cofounder and active member of the new “d.school.” His new book, with Huggy Rao, is Scaling Up Excellence: Getting To More Without Settling For Less.