How to Boost Desire Using the Psychology of Scarcity

How to Boost Desire Using the Psychology of Scarcity

Editor’s Note:  We look forward to welcoming Nir Eyal to PARC Forum next Thursday, April 10. Register today and join us for “Hooked: How to Build Habit-forming Products.” 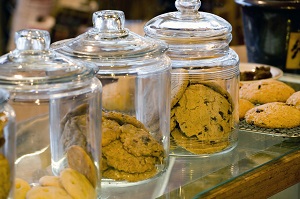 Interested in boosting customer desire? A classic study reveals an interesting quirk of human behavior that may hold a clue.

In 1975, researchers Worchel, Lee, and Adewole wanted to know how people would value cookies in two identical glass jars. One jar held ten cookies while the other contained just two stragglers. Which cookies would people value more?

Though the cookies and jars were identical, participants valued the ones in the near-empty jar more highly. Scarcity had somehow affected their perception of value.

There are many theories as to why this was the case. For one, scarcity may signal something about the product. If there are less of an item, the thinking goes, it might be because other people know something you don’t. Namely, the cookies in the almost empty jar are the num-numier choice.

Classical economic theory starts with two key assumptions: First, consumers are armed with “perfect information.” Second, people behave rationally. However, in the real world, these two conditions are more the exception than the rule. In fact, marketers do their best to trigger cognitive quirks, like the scarcity heuristic, to influence behavior.

Even though it may make no objective difference regarding what is actually being sold, marketers know context matters just as much as the product itself. The near-empty jar with just two cookies left in it conveys valuable (albeit irrelevant) information.

For another example of the importance of context, consider what happened when the world-class violinist Joshua Bell decided to play a free impromptu concert in the Washington, DC subway. Bell regularly sells-out venues like the Kennedy Center and Carnegie Hall for hundreds of dollars per ticket. But placed in the context of the DC subway, his music fell upon deaf ears. Almost nobody knew they were walking past one of the most talented musicians in the world.

When Bell gave away his concert for free, few stopped to listen. But when he charges beaucoup bucks, his music becomes a rarefied commodity and thousands of people pay-up.

Can the same principles of scarcity and context make technology products more desirable? You bet your sweet cookies they can!

In its early days, Facebook was only available to Harvard students. Then, the service rolled-out to the Ivy League. Soon, Facebook was made available to college students nationwide. Then came high school kids and later employees at select companies. Finally, in September of 2006, Facebook was opened to the world.

Today, Facebook is used by over a billion people but its early invitees were among a small exclusive group. As the service grew in popularity, others wanted in too.

Though it ultimately worked to his advantage, it is unclear if Zuck knew what he was doing. In a vintage video, the Facebook founder described his intent to keep the service just for college kids. We will never know if Facebook’s scarcity strategy was intentional or not, but the fact remains, it worked. The buzz soon grew about the social network made by, and only available to, Ivy kids.

When scarcity is a feature, as was the case for early Facebook converts, the service’s limited access increased its appeal.

Today, Quibb, an online discussion board frequented by a select cadre of tech professionals and entrepreneurs, provides a more recent example of the scarcity heuristic at work.

Quibb is curated by its founder Sandi MacPherson who personally decides who gets in and who stays out. MacPherson turns away far more people than she accepts and getting her approval is equivalent to getting past the velvet rope of an exclusive night club. That is, if the nightclub were full of tech geeks.

“When it comes to professional content, I believe that it actually matters who you are,” MacPherson wrote in an email interview. MacPherson says she did not build Quibb to be a big company — although it might end up being one some day. Her intent was to create a place for people she thinks are interesting to communicate with one another — MacPherson gets the satisfaction of listening-in.

MacPherson set out to filter out the noise of open communities like Hacker News and Reddit by only letting select people join the community. For Quibb members, the scarcity of the invites MacPherson doles-out is a virtue of the service.

Facebook and Quibb provide examples of how exclusivity can increase appeal. But earlier this year two companies showed how scarcity can backfire. 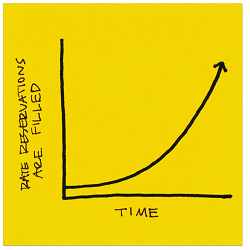 Mailbox and Tempo, both iOS productivity apps, released their services to small groups of users. If you were not at the front of the line, you had to wait for an indefinite period of time. The only condolences when you opened either app was to see how many people were ahead of you in the queue — only 21,000 people to go and you’re in!

Mailbox’s attempt at damage control came in the form of a blog post explaining their roll out plans. At the center of the plea for patience was what appeared to be a hand-drawn yellow post-it note. As if sketched in the nick of time to placate the angry mobs, an exponential curve showed that soon, the company would accept many more users. But unlike in the case of Facebook, frustrated customers punished Mailbox for the wait. They trashed the app by writing poor reviews despite never having actually used it.

As for Tempo, CEO Raj Singh said his app’s waitlist was a response to its unexpected popularity. In an email interview Singh wrote, “We mis-estimated demand for Tempo by 24X.” Expressing his regret, Singh continued, “There may have been some velvet rope effect but trust me, that was absolutely not the intention…We probably lost ~100K registered users as a result of the line.”

So why the difference in the response to Facebook versus Tempo or Mailbox? For one, it’s not clear things turned out all that bad. After all, Mailbox was snatched up by Dropbox in a rumoured $100 million acquisition and Tempo just raised a respectable wad of cash.

Nonetheless, as these examples show, scarcity made some people lust, while making others livid. But why? Here again, the 1975 cookie jar study provides some clues.

In the second part of their experiment, Worschel, Lee, and Adewole wanted to know what would happen to the perception of the value of cookies if they suddenly became scarce or abundant.

Groups of study participants were given either jars with two cookies or ten. Then, the people in the group with ten cookies suddenly had eight taken away. Conversely, those with only two cookies had eight new cookies added to their jars. How would the changes affect the way participants valued the cookies?

The researchers showed that consistent with the scarcity heuristic, the group left with only two cookies, rated them to be more valuable. However, those who got more cookies, experiencing sudden abundance by going from two to ten, actually valued the cookies the least. In fact, they valued the cookies even lower those people who had started with ten cookies to begin with.

The study showed that a product can decrease in perceived value if it starts off as scarce then becomes abundant. Sound familiar? Take a look at the Mailbox post-it note graph again, that is exactly what the graph shows.

To potential users, Mailbox and Tempo’s scarcity backfired, at least in the short-term. Attempts to placate users by telling them about the technical limitations of “load testing,” obviously didn’t cut it. Instead, the message received was akin to, “this is going out to the cool kids now and the rest of you plebs, well, we’ll see.”

In contrast, Facebook and Quibb never made any appeals for patience or promises of expanding to the masses. Their products started-out as scarce and the founders closely guarded the perception that they will remain so. When asked about his expansion plans past Harvard, Zuckerberg says, “There doesn’t necessarily have to be more.”

Of course, there was much, much more. Young Zuck masterfully explained Facebook’s small footprint at the time as a necessity to providing the level of service he wants to give his users, typifying the lesson that for scarcity to increase perceived value, it must be a feature of the product, not a bug.

Nir’s Note:  Yu-kai Chou, creator of the Gamification Framework Octalysis, contributed to this article. Follow him at @yukaichou.

Nir Eyal writes, consults, and teaches about the intersection of psychology, technology, and business. Nir founded and sold two companies since 2003 and has taught the “Using Neuroscience to Influence Human Behavior” course as a lecturer at the Stanford Graduate School of Business. In addition to blogging at NirAndFar.com, Nir’s writing frequently appears in TechCrunch, The Atlantic, and Psychology Today. He is the author of Hooked: How to Build Habit Forming Products.

Editor’s Note:  This article originally appeared on Nir & Far and can be read here.