How to Build Habits in a Multi-device World

How to Build Habits in a Multi-device World

Editor’s Note:  We look forward to welcoming Nir Eyal to PARC Forum this Thursday, April 10. Register today and join us for “Hooked: How to Build Habit-forming Products.” 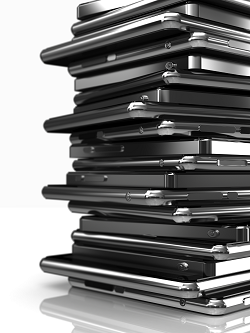 Allow me to take liberties with a philosophical question reworked for our digital age. If an app fails in the App Store and no one is around to use it, does it make a difference? Unlike the age-old thought experiment involving trees in forests, the answer to this riddle is easy. No!

Without engagement, your product might as well not exist. No matter how tastefully designed or ingeniously viral, without users coming back, your app is toast.

How, then, to design for engagement? And as if that were not challenging enough, how should products that touch users across multiple devices, like smartphones, tablets, and laptops, keep people coming back?

The answer is habits. For the past several years, I have written and lectured on how products form habits, and my work has uncovered some conclusions I hope will prove helpful to product designers.

To be clear, not every product requires user habits; plenty of businesses drive traffic through emails, search engine optimization, advertising, and other means. However, if the company’s business model requires users to come back on their own accord, unprompted by calls to action, a habit must be formed.

The good news is that in today’s multi-screen world, the ability to interact with multiple devices has the potential to increase the odds of forming lasting user habits. By designing across devices, developers have a unique opportunity to leverage an ecosystem approach to drive higher engagement.

Through my research, I have found a recurring pattern endemic to these products, which I call “the Hook Model.” This simple four-phase model is intended to help designers build more engaging products.

Building for habits boils down to the four fundamental elements of the Hook: a trigger, an action, a reward, and an investment. This pattern can be found in any number of products we use automatically, almost without thinking.

Designing for multiple interfaces means your product is more readily accessible throughout the day. The more often the user chooses a particular solution to meet her needs, the faster a habit is formed. A trigger is the event in the user’s life that prompts her to use the product.

Sometimes the trigger can be external, such as when a user receives a notification with a call to action. Other times, the trigger is internal and the information for what to do next is imprinted in the users’ memory through an association. For example, many products cue off of emotions as internal triggers. We use Facebook to socially connect with friends and family when we’re lonely and check ESPN or Pinterest when we’re bored.

It is important that companies understand the users’ internal triggers so they can build the product to meet those needs. Designers should be able to fill in the blank for the phrase, “Every time the user (______), they use my app.” The blank should be the internal trigger.

Take, for example, the experience Nike has constructed for its aspiring athlete customers. Nike’s suite of products includes wearable monitors, which track physical activity throughout the day, as well as a host of smartphone apps to be used while running, playing basketball, or golfing.

For Nike, it is critical that users attach the company’s products to a discrete moment in their lives. To succeed, Nike has to own the instant just before the user heads out the door to work out. Athletes want to know their effort matters and Nike helps them meet that need. By digitally recording the workout, Nike’s apps tap into a deeper emotional need to feel that all that sweating is not going to waste, that the amateur athlete is making progress.

By creating an association with a moment in time—in this case, every time the user exercises—Nike begins the process of creating a habit.

When it comes to multi-screen experiences, it is important to design a narrative for how the product is actually used. Knowing the sequence of behaviors leading up to using the products, as well as the deeper emotional user needs, is critical for successfully executing the next step of the Hook, the action phase.

The action is the simplest behavior the user can take in anticipation of reward. Minimizing the effort to get to the payoff is a critical aspect of habit-forming design. The sooner users can get to the reward, the faster they can form automatic behaviors.

In Nike’s case, simply opening the app or wearing one of their body-mounted devices alleviates the user’s fear that the exercise will be in vain. Clicking a button marked Run in the Nike+ running app, for example, begins tracking the workout and gets the user closer to the relief he was looking for.

Finding ways to minimize the effort, be it by eliminating unnecessary logins or distracting functionality, improves the experience both on mobile and web interfaces. Nike makes the action of tracking exercise easier by building products designed to make recording even easier — for example, shoe-mounted devices that passively collect information.

Designers should consider how many steps they put in the way of users getting what they came for. The more complex the actions, the less likely users are to complete the intended behavior.

The reward phase of the Hook is where the user finally gets relief. After being triggered and taking the intended action, the user expects to have the internal trigger satisfied. If the user came to relieve boredom, she should be entertained. If the trigger was curiosity, she expects to find answers.

Thus, the reward phase gives the user what she came for, and quickly! When the athlete uses the Nike app, for example, a 3-2-1 countdown displays to signify that the workout is about to begin. The user can get on with her run, knowing it is being recorded. But the Nike suite of products layers on more rewards. The apps not only record the workout, they also motivate it.

To boost their habit-forming effects, many products utilize what psychologists call intermittent reinforcement. When products have an element of variability or surprise, they become more interesting and engaging. For example, scrolling on Twitter or Pinterest offers the allure of what might be found with the next flick of the thumb.

In Nike’s case, the element of variability can be found in various forms throughout its product experience. For example, when athletes connect to Facebook, the app posts to the social network and runners hear the sound of a cheering crowd every time one of their friends “likes” their update. The athlete never knows when they’ll hear the encouragement and the social rewards help them keep pushing forward.

Nike also implements a point system called NikeFuel, which is meant to be a quantification of physical activity. However, the mechanics of how rapidly points are earned is intentionally opaque, giving it an element of variability. Finally, exercising itself has an element of surprise, which Nike’s products accentuate by encouraging users to complete new and increasingly challenging activities.

Lastly, a critical aspect of products that keep users coming back is their ability to ask for an investment. This phase of the Hook involves inviting the user to do a bit of work to personalize the experience. By asking the user to add some effort into the app, the product increases in value with use, getting better the more the user commits to it.

Investments are actions that increase the likelihood of the next pass through the Hook by loading the next trigger, storing value, and creating preference for using the product. It is important that the four phases of the Hook are followed in sequential order for maximum impact.

Every time the user exercises with a Nike app or body monitor, she accrues a history of performance. The product becomes her digital logbook, which becomes more valuable as a way of tracking progress the more entries she makes. Additionally, each purchase of a Nike+ device—like a FuelBand, for example—is a further financial and psychological investment in the ecosystem.

Nike and other exercise training apps, like Strava, allow athletes to follow other athletes to compare performance. The action of selecting and following other users is a form of investment; it improves the product experience with use and increases the user’s likelihood of using the product again.

In the future, products like Nike+ could automatically collect information from multiple touchpoints to create an individualized workout plan. The product could improve and adapt the more the user invests in using it.

For multi-interface products that rely upon repeated user engagement, understanding the fundamentals of designing habits is critical. By following the Hook Model of a trigger, an action, a reward, and finally an investment, product designers can ensure they have the requisite components of a habit-forming technology.

By building products that follow users throughout their day, on smartphones, tablets, and more recently wearable devices, companies have an opportunity to cycle users through the four phases of the Hook more frequently and increase the odds of creating products people love.

Nir Eyal writes, consults, and teaches about the intersection of psychology, technology, and business. Nir founded and sold two companies since 2003 and has taught the “Using Neuroscience to Influence Human Behavior” course as a lecturer at the Stanford Graduate School of Business. In addition to blogging at NirAndFar.com, Nir’s writing frequently appears in TechCrunch, The Atlantic, and Psychology Today. He is the author of Hooked: How to Build Habit Forming Products.

Editor’s Note:  This article originally appeared on Nir & Far and can be read here.