Meet the PARC Researcher: Sai Explores the Future of Computer-Aided Design and Manufacturing

Meet the PARC Researcher: Sai Explores the Future of Computer-Aided Design and Manufacturing

Sai Nelaturi manages the Computation for Automation in Systems Engineering area in the System Sciences Lab at PARC. The area’s goal is to research and develop next-generation representation, modeling, and analysis tools to support automation in systems engineering, design, and fabrication.

Sai, tell us about your role and your group at PARC?

I’m a Research Area Manager at PARC and I manage a group called CASE, which stands for Computational Automation for Systems Engineering, and in my group we solve a lot of applications in engineering design and manufacturing that deal with automated reasoning of complex processes during engineering design and fabrication planning. Some of these applications involve collision detection, spatial planning, packaging, manufacturing analysis. We basically try to look at where engineering software can provide much value to a human designer.

Can you share any of the projects you and your group are working on?

One of the projects that we’re working on right now that I’m most excited about is called FIELDS (Fabricating with Interoperable Engineering, pLanning, Design, and analysiS), and this is a project where we’re trying to rethink the foundations of computer-aided design (CAD) and really build the future of computer aided design and manufacturing analysis software. This project is funded by DARPA by the Defense Sciences offices where they’re thinking of how to harness the capabilities of modern manufacturing systems such as additive manufacturing systems that can work with multiple materials and yet be able to deal with the complexities enabled by these systems that are simply not there in computer aided design systems today.

How do you bridge design and manufacturing?

One of the really interesting things we’re doing in the FIELDS project is connecting the designs and the representations that we’re inventing to manufacturing capabilities, and 3D printing is a really attractive use case because now you can actually print very complex shapes with multiple materials. So as an example of what we’re doing, here’s a cross section enlarged of a human femur (holds up model) that shows multiple materials toward the outer structure of the bone as well as the micro structure on the inside that you can see has functionally graded material properties.

To model and represent this and even 3D print this now, it takes quite a bit of “hacking” of both the printer as well as the softwares that are used, because today, this kind of complexity is not really supported by 3D printers. But if we’re able to create a design system that not only does the design optimization, but also connects it to manufacturing process planning and then finally to create manufacturing instructions for a 3D printer, we have an end-to-end system for the design and manufacturing for next-generation products. 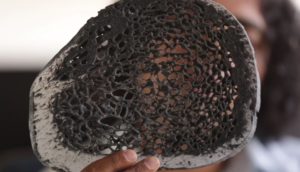 What advice would you give an intern starting at PARC?

Interns have a unique challenge because they’re here a relatively short time, and usually given a great problem to work on. Persistence is really the key, if they spend the initial effort to understand the diversity of projects PARC works on, and then see that their experience is not just limited to one or two projects, but that they can learn from it all, it becomes a very productive and fruitful experience. We like to think of each intern as a potential collaborator, someone who will maybe even join PARC one day, or go back and continue their research further, and I think when interns understand that we see them as collaborators, they have a rich experience.

We hear you play in a band, can you tell us more?

Sure, I’ve been in bands since I was in college. I play guitar, keys, I sing too. I used to be in a progressive rock band, we recorded albums, went on tour and all that. The band now, we’re still a rock band, but a lot more electronic. We’re called Novela. We were thinking of what kind of songs we were writing, and they all seemed to fit together like stories, and thought, it kind of sounds like a novel. Also there’s a pun on the word, hopefully it’s “novel” music (laughs). But yeah, music is how I de-stress.

Do you find any parallels between music and science?

I think playing music is another endless world you can start exploring, where you try to get good at an instrument, listen to musicians who are obviously much, much better than you, strive to see where your limits are, realize you have limits, and then try to morph them, develop your own voice, do things differently. Which is kind of like research.

In research, you pick a topic or direction you want to go in, you realize you can keep going further and there’s so much that’s been done before you, but you want to create your own voice, and times change, and voices change, and the applications change, so finding that little corner where you can contribute, is at an abstract level the same thing. I suppose it’s another expression of that need to make an impact.

On a perfect Sunday, how are you spending your day?

I like to hang out with my wife and dog.

That’s as good as it gets on a Sunday afternoon. 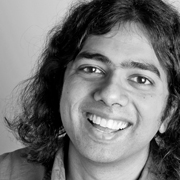