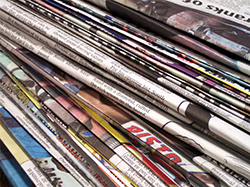 Scope (Stanford Medicine Blog) – Stanford Bioengineer Develops a 50-cent Paper Microscope
By Kris Newby
“When Manu Prakash, Ph.D., wants to impress lab visitors with the durability of his Origami-based paper microscope, he throws it off a three-story balcony, stomps on it with his foot, and dunks it into a water-filled beaker. Miraculously, it still works. Even more amazing is that this microscope — a bookmark-sized piece of layered cardstock with a micro-lens — only costs about 50 cents in materials to make.”

Nir&Far – Why Do Fads Fade? The Inevitable Death of Flappy Bird
By Nir Eyal
We look forward to welcoming Nir Eyal at PARC Forum on April 10. In this article he explores: “What is at the heart of today’s digital juggernauts and why do they seem to disappear as quickly as they rise? What is it about the things that capture our attention in a mental vice grip, only to be ridiculed as faddish whims later?”

The New Yorker – VIDEO: How to Put a Star Into a Bottle
By Raffi Khatchadourian
Here’s a fascinating video and 3D graphics detailing the construction of the world’s largest fusion reactor to “generate a plasma that produces more energy than it consumes.” Take an in-depth look at the International Thermonuclear Experimental Reactor and “what will happen inside of the massive, donut-shaped reactor, and why building it requires such incredible precision.”

Phys.org – World’s First 3D Acoustic Cloaking Device Hides Objects From Sound
By Ken Kingery
“Using little more than a few perforated sheets of plastic and a staggering amount of number crunching, Duke engineers have demonstrated the world’s first three-dimensional acoustic cloak. The new device reroutes sound waves to create the impression that both the cloak and anything beneath it are not there.”

NPR’s Fresh Air – When It Comes To High-Speed Internet, U.S. ‘Falling Way Behind’
In this compelling interview, Susan Crawford, author of Captive Audience: The Telecom Industry and Monopoly Power in the Gilded Age, explains how “American Internet service is falling behind other nations because cable companies have such dominance in many markets, and that will undermine our ability to compete in a global economy.”

Gizmodo – The World’s Thinnest LED Is Only 3 Atoms Thick
By Adam Clark Estes
“A team of scientists from the University of Washington just built the world’s thinnest possible LED for use as a light source in electronics. It’s just three atoms thick.”

Slate – Cosmos: On the Shores of the Cosmic Ocean
By Phil Plait
Will the new Cosmos television series influence and help spark a new generation of scientists like Carl Sagan’s original version? Only time will tell.