No More Cheerleading: Addressing the Gender Gap with a Holistic Approach

No More Cheerleading: Addressing the Gender Gap with a Holistic Approach

A few weeks ago, I had the pleasure of hosting a group of women Emerging Leaders in STEM fields from the Middle East and Africa who are participating in the TechWomen mentorship program. This group of amazing women is so inspiring – founding companies, fostering innovative business ideas, and generally bucking so many trends in their countries of origin. Wow. Talk about brave. 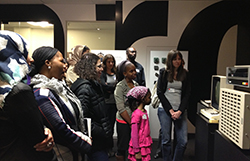 That evening’s experience made me once again think about the gender STEM gap here in the U.S. and wonder why we haven’t made more progress. Apparently I’m not the only one recently ruminating on the topic, as exemplified by Pinterest engineer Tracy Chou’s October article on Medium  and accompanying post of the data she’s collected on Silicon Valley companies in a public Google spreadsheet. She’s particularly concerned about the “leakage” in the numbers when women hit the workforce, where the appallingly small numbers of women in STEM majors, less than 12% of computer science majors, for example, drops even further as women move away from technical roles in the corporate environment.

Leakage or no leakage, the whole picture (just 12%!) is pretty bleak from my point of view. But there have been some successes. Chou also references the book Unlocking the Clubhouse, which in part chronicles efforts at Carnegie Mellon University that have increased the proportion of women entering the computer science program from just 7% in 1995 to an impressive 42% in just 5 years. Unsurprisingly (to a PARC person), the project at CMU to understand the problem and create new processes to attract and retain more women included the participation of a social scientist, Jane Margolis. And the solution has been multi-faceted including curriculum adjustments, support network implementation, and active leadership from the top.

So why haven’t more universities or seemingly any companies taken a page from CMU’s playbook? Maybe it’s because it’s easier to bemoan the statistics and promote another program to “encourage” more women to come on board without taking the hard look at what else might need to change to truly support greater participation by women. A study by the American Mathematical Society published in 2008 and quoted in a recent New York Times article on the disparity between the numbers of women and men in science concluded that “The scarcity of women at the very highest echelons ‘is due, in significant part, to changeable factors that vary with time, country and ethnic group. First and foremost, some countries identify and nurture females with very high ability in mathematics at a much higher frequency than do others.’”

Granted, the problem does begin early, at least here in the U.S., so we need to start early. But it does seem to me if we understand all the factors, we can address many of the issues holding women back, and maybe even support many men better, too. I just hope we can see our way to understanding the humans – female or male – at the center of the question.