This post is an excerpt of an article by Soji Saito, Nikkei Computer that currently appears (in Japanese) on itpro.nikkeibp.co.jp.

“Where on the tracks? Which train car? What type of breakdown? Now the knowledge normally obtained and accumulated among train maintenance workers through their work can be revealed with IoT technology,” explains Atsushi Yokoyama, Head of Technology Planning at East Japan Railway Company (JR East). 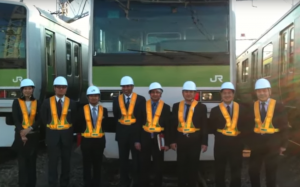 JR East is one of ‘The 2017 Competitive IT Strategy Company Stocks’ selected by the Ministry of Economy, Trade, and Industry and the Tokyo Stock Exchange for the third consecutive year. The reason for the 2017 selection was JR East’s efforts toward CBM for the Yamanote line train car ‘E235’ and others.

JR East’s main method for train maintenance work previously was time-based maintenance. The company determined when to replace their facilities based on past records including the time period of Japanese National Railways (JR East was previously Japanese National Railways). They are currently doing a regular inspection once every 3 months to meet maintenance standards. “We prioritize passengers’ safety while thinking about the inspection cycle, and replace the facilities in good time,” says Yokoyama.

Applying CBM to trains is a method involving frequently collecting and analyzing the status of train tracks, wires, and cars through sensors and others, so as to make the maintenance work efficient and cost-effective. If CBM technology monitors the status of facilities in real time, they can be replaced timely before its durable life, which saves costs.

Another advantage of CBM is that it enables teams to test the impact of facility replacement in real time. For instance, if replaced facilities deteriorate slower than before, it is safe to reason that the replacement was effective. In the past, measuring the effectiveness of renewal could be done every 3 months.

How did JR East successfully introduce CBM in the most advantageous way? Yokoyama takes a ‘door’ of a train car as an example. First of all, sensors measure the electric flow and voltage and application force of actuator (engine of the door). Then collected data are sent to JR East’s server via wireless communication and analyzed. If the current values were more than before, it could be assumed that the friction of the door system was increased. This may be a warning of breakdown. 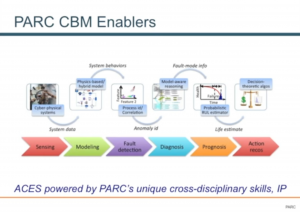 A ‘logic (algorithm)’ to match the physical quantity of obtained data and the type of breakdown is needed for this sort of assumption. But it is not easy to find the logic because data from sensors are diverse. “We need to look into various indexes including the maximum, mean, and SD even for one parameter like the electric flow. We need to see the location information and so on as well. So it was so difficult to find correspondence relationships,” says Yokoyama.

JR East collaborated with PARC to analyze the correspondence relationship. PARC is a research center and wholly owned subsidariy of Xerox, located in the Silicon Valley, and data analysis is a part of its capabilities. The collaboration started in 2013. JR East utilized PARC’s knowledge to identify a logic to detect a door error from data of IoT sensors. This outcome was used for the Yamanote Line train car ‘E235’. As of June 2017, 4 fleets of E235 with CBM are running. 17 fleets are planned to be running by March, 2018.

Yokoyama says CBM is useful for a product consisting of several parts like a door. “Train tracks and wires can be replaced when it becomes worn and a certain size. But with a door this is not the case, because to the human eye, it looks to break suddenly. This is the same for the turnout and transformation installation.”

The Monitoring System for Train Track Facilities is working on 6 lines of JR East. The first introduction was Keihin Tohoku Line in 2013. Then, Yamanote Line, Chuo Line, Nikko Line, Tohoku Main Line, and Echigo Line. Settings including train track structure and train type are different between urban sections and rural sections, so data collected through CBM are also different.

JR East aims to expand the application of CBM to ticket gates, tunnels, bridges, and transformation installations in the future. CBM is also beneficial for the aging society. Yokoyama said ‘Veterans from Japanese National Railways are retiring. We want to reduce the workload for maintenance and pass the technique down to future generations.’