Japan has an incredibly strong history of innovation. Yet the country too often starts out with dominant market share only to lose leadership as the pace of innovation quickens.

For example, its world market share of Lithium-ion Batteries (LiB) for mobile and portable devices declined ~60% in 19 years. Solar panels ~30% in 4 years. DRAMs ~55% in 15 years. DVD players ~70% in 9 years. LCDs ~80% in 7 years. Car navigation systems ~80% in 5 years. In none of these industries has any meaningful market share loss been recovered. Now, their world market share in Lithium-ion batteries (LiB) for vehicles has dropped ~20% in the past 5 years. While Japan’s share is still a robust ~80%, Japan’s track record forebodes an unhappy ending.

In light of this history, I recently attended the Battery Japan 2013 conference (part of Japan’s World Smart Energy Week 2013, which drew over 75,000 unique visitors from all over the world) full of concern.

Considering Japan’s track record with innovation and market share loss, keynote speaker Tetsuya Osaka questioned whether Japanese companies had ‘solved their structural problems.’ I was further concerned when he essentially called for Japanese entities to band together, look inward, and work closely to maintain the country’s dominance in this segment. In a world of increasing globalization, Japan needs to embrace open innovation… again! An examination of the history of the LiB shows American and Japanese collaboration on development of the LiB technology and Japan’s eventual dominance in the marketplace. 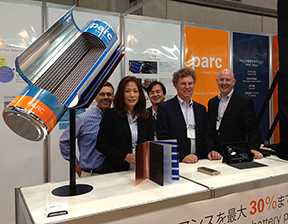 After the keynote addresses, I joined my colleagues at the PARC exhibition where we were showcasing our CoEx Battery (translation in Japanese) technology. What I witnessed and experienced in the next few days started to allay my concerns, and I actually left the show with a sense of hope for the future leadership of Japan’s LiB for vehicles. We had a steady flow of visitors throughout the show and received positive feedback on our technology from many of the Japanese battery manufacturers. In fact, several executives responded to our outreach by sending multiple battery experts to visit us, explore our offering, and follow up after the show.

Such activity is an encouraging sign that some Japanese battery companies realize that open innovation is not only needed to enter a market, but also an important way to accelerate innovation throughout the life of a business. It’s still early in the LiB for vehicles story with Japanese battery makers. I believe those armed with open innovation can finally shake the traditional outcomes we have seen in the past and write a different ending to their stories – one that is full of innovation, market share leadership, and success.