Editor’s note: EE Times invited this post from Scott Elrod, who directs our cleantech program. You can see the original commentary here.

PARC was recently invited to present transformative ideas at an energy technology conference sponsored by ARPA-Energy, a new Energy Department agency charged with funding high-risk, high-payoff technology. The agency recently set a benchmark in government efficiency by reviewing 3,700 project proposals from across the U.S. in record time, ultimately funding 37.

I’ve shared some of the innovative ideas I saw at the technology showcase in another post, but the key questions that persist are: 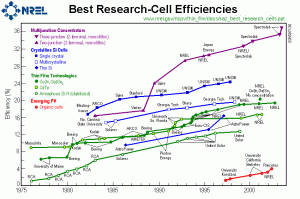 One of the most telling trends I’ve seen is revealed through a National Renewable Energy Laboratory chart [at right] showing solar cell efficiency versus time using silicon, amorphous silicon, CdTe, copper indium gallium selenide (CIGS), organic, dye-sensitized. The trend lines have a nearly universal slope, with efficiency increasing in the lab at the rate of only about 4 percent per decade.

While there may not be a universal law behind this trend, the sobering fact is that materials-related research takes a very long time. Progress comes in fits and starts, often with serendipitous occurrences. One striking example is the way that CIGS efficiency improved around 1993 when the material was grown on soda-lime glass instead of borosilicate glass. It was later found that sodium from the soda-lime glass was diffusing into the solar cell, improving its performance.

Why is this trend telling? The consequence of such slow materials development is that a new or complex materials like nanostructured photovoltaics do not have a real shot at mitigating global warming. Caltech’s Nate Lewis has argued that we will need more than 10 terawatts of carbon-free energy by 2050 ” the equivalent of building 1 large nuclear power plant every other day — for the next 40 years. If we assume that it will take 15 years for a new material to reach the commercial market at 1 megawatt scale, and that the annual production capacity thereafter grows with a 50 percent CAGR (which is greater than solar), then the technology’s installed base would still only amount to 0.075 TW by 2050.

Given the math, it is clear that global warming needs to be addressed by rapidly scaling the technologies that are already proven at gigawatt scales (wind, PV, nuclear), and by implementing energy savings technologies that are not based on radically new materials. So, while it might be possible for a technology or company to be a “winner” in terms of VC investment, this is not the same as winning against global warming.

With those realities in mind, I highlight some promising technologies from the ARPA-Energy event:

Another interesting technology is based on a simple strategy we often use for rapidly scaling new technologies: leverage existing manufacturing approaches.

For example, working with BP Solar and other companies, PARC has been able to exploit its printing expertise developed for Xerox to print high-efficiency contacts onto solar cells. Since the focus is on working within existing manufacturing constraints, our method uses a drop-in printing approach that can convert a 100 MW fab into a 106 MW fab — at roughly the same cost as existing processes.

In general, printing is one of the lowest cost means to fabricate complex patterns on a substrate. We’re now extending this approach to print complex 3-D structures such as battery electrodes.

The recurring theme here is scalability, which is essential in addressing the true scope of global warming. This attribute alone separates the clean tech winners and losers.

Clearly, it’s a different innovation landscape today. No longer can companies work in silos with their captive research departments to achieve organizational goals, or simply pick up a company to acquire expertise they still won’t know how to scale. To generate high-value clean technologies, researchers, VCs, large corporations, government agencies, universities and policymakers have no choice but to work together.