The “channel blending” (vs. multitasking) phenomenon — and opportunities

The “channel blending” (vs. multitasking) phenomenon — and opportunities 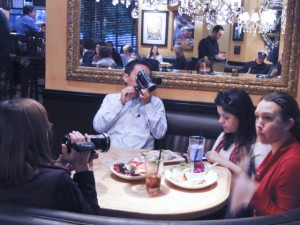 Um, this is “shadowing”… not stalking!

A little while ago we did some exciting research with Sony using a novel approach to studying mobile communication. I recently presented a paper about this work at the 2012 ACM Conference on Computer Supported Cooperative Work — CSCW 2012. In our study, we identified small groups of friends and family who like to stay connected and we video-recorded them for a half-day as they went about their activities. It’s challenging enough to video-record people as they move among many locations, often in public places, but we also arranged to have different researchers record each member of the group all at the same time. So we were able to capture each person’s point of view as they connected, engaged, and disconnected with one another, sometimes through technology and sometimes face-to-face.

Of course, when they got together in person that meant we’d have multiple cameras recording them, which the CSCW audience found amusing based on the photos I showed:

Through this study, PARC identified a phenomenon we call “channel blending”, which, in contrast to multi-tasking, is the blending together of interactions and content across multiple channels, devices, and places into a single, coherent conversation. We identified a gap in current communication technology, which generally supports one-to-one or many-to-many interactions, assuming that each person is alone in a space with a single device. Yet we found that many interactions were conducted among small groups of people of 2-6, who often connected with multiple people in each space using multiple devices, sometimes re-sharing content they previously shared over another channel. We showed videos that demonstrated channel blending, and pointed out how a “pivot person” usually had to do a lot of work to integrate the comments and content coming from multiple sources to make sure everyone was included and engaged in the conversation.

You can see the slides below or in our Slideshare channel — they illustrate, rather than summarize, the points, so you’ll need to read the notes beneath each slide. There were also three videos in the talk, which just appear as static images in the slides, but the speaker notes should give you a sense of what they showed!

You can also read the full paper here.