With little knowledge of what I was about to embark on for the morning, I walked into CityCamp Palo Alto where I was instructed to sit at tables of four, with design worksheets and a pen waiting for me. Sitting with strangers – soon to be “buddies” – I anxiously awaited instructions from the d.school facilitators to start the design thinking process in five steps.

As part of the National Day of Civic Hacking, the city of Palo Alto facilitated “create, build, and invent” activities. I attended one of the activities, a free Design Thinking Workshop on sustainable transportation issues for Palo Alto. It was an incredible and exhilarating morning of not only learning the components of design thinking, but also creatively tapping into problem-solving and ideas first hand.

First, we conducted “buddy interviews” to build empathy in groups of two. The buddies conducted 4-minute interviews, listening for stories and emotions about each other’s transportation needs or issues. My buddy was Tahv, a 14-year-old Kung Fu practitioner and jazz piano player who walked to school. “Hmmm,” I thought to myself. “How great is that, he walks to school, super sustainable.” Digging deeper, Tahv’s real goal was to ride his bike to school, and he felt guilty when his parents drove him. However, every time he rode his bike, the tires popped from debris on the road. 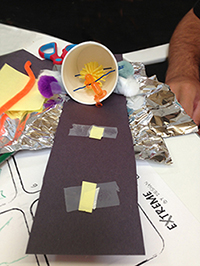 Tahv interviewed me and found out I drive a 9-year-old, gas-only car to Palo Alto from San Francisco everyday. For me taking public transportation is time prohibitive (two and a half hours each way). My driving is not very green and I feel uncomfortable about that. A hybrid might be ok, but most of my driving is on the highway and wouldn’t use much of the battery’s advantage and an electric vehicle would not work for longer trips.

Second, in three minutes on our own, we wrote down our buddy’s needs, being as descriptive as possible.

Third, and one of my favorite portions of the day, we brainstormed ideas by drawing pictures they called “idea sketches,” drawing as many ideas as we possibly could in five minutes.

Fourth, my absolute favorite activity of the day, was constructing a prototype from one or more of our ideas. We had only 10 minutes to “build our idea(s),” using a table full of chenille stems, colored paper, aluminum foil, paper clips, pens, scissors, tape, plastic toys, paper cups, and other materials.

Fifth, we presented our prototypes to our buddies, the “testing/feedback session.”

For Tahv’s tire problem, there were three solutions that I proposed: airless tires, tires with spikes on them, and a flying bike, powered by peddling. 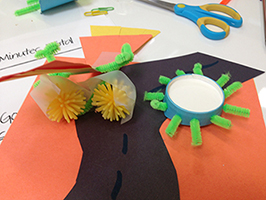 Without knowing it, we went through the four interactive design steps: frame, imagine, make, and test!

After the workshop we were invited to view a very inspiring documentary titled Extreme By Design. The hour-long film will be shown on PBS. The film captures “the experience of three Stanford d.school students as they design and build products that may save thousands of lives in Bangladesh, Indonesia, and other developing countries they visit.”

The awesome 75 minutes of design thinking and the one-hour movie was exhilarating, cool, and motivational! While I know many PARC researchers naturally follow this approach and use these processes daily, I didn’t realize how easily the design process can be applied to the solution of any problem. I’m looking forward to applying what I learned to my work as PARC’s graphic designer.

The workshop was facilitated by the fabulous Stanford d.school and funded by SAP and First Person Impact at CityCamp Palo Alto. Many thanks!