The Future of Cleantech Innovation

The Future of Cleantech Innovation

Editor’s note: PARC contributed a version of this article to the State of Green Business Report 2012, by Joel Makower and the editors of GreenBiz.com. You can download the full report here.

While optimistic technologists (like myself!) tend to imagine forests of quantum-nanowire photovoltaic (PV) panels powering the planet by 2050, the reality is that cleantech innovation in the next 40 years may not turn out to be as “sexy” as you imagine.

Don’t get me wrong – I believe the ability to envision new possibilities is necessary to move science forward. Some of the most elegant possibilities that have come out of research labs (for example, Stanford’s photon-enhanced thermionic emission, Berkeley Lab’s hot electron PV device) definitely inspire wonder. But the more realistic and likely path for commercial success in cleantech will be through steady improvements made to existing technologies: “innovations” as opposed to just “inventions”.

Technology adoption doesn’t happen in a vacuum. There’s a broader social, cultural, political, and especially economic context that influences cleantech (and other) innovations. For one thing, there are powerful incumbent technologies, like coal-fired power plants and the infrastructure for oil extraction and refining. Putting aside the contextual factors I mentioned, these technologies have unbelievably large economies of scale: terawatt-level, which is far beyond the gigawatt scale of today’s solar. So though we might want to displace the current carbon economy, this task is much easier said than done.

There is no Moore’s Law for PV. 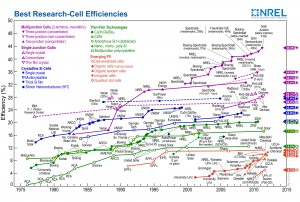 While many have already dissected what went wrong with Solyndra, the company actually had one thing right. It recognized that the only way to compete with incumbents was to grow to very large scale, very quickly. Even for the relatively small PV industry (only 0.4% of global electrical energy production in 2010), success is now measured in gigawatts. Realizing this, Solyndra rapidly built out its fabrication capability… unfortunately, its CIGS approach was unproven and did not actually result in the necessary cost performance. Why? Because the process of optimizing novel semiconductor materials like Solyndra’s is painstaking, a point made abundantly clear in the National Renewable Energy Laboratory’s chart of research PV-cell efficiencies: it shows only a 4% improvement in conversion efficiency every 10 years. There is no Moore’s Law for PV.

So where do we get non-carbon-emitting energy at the scale of 10-20 terawatts by 2050? (which is what we’ll need, according to the Intergovernmental Panel on Climate Change). Only the technologies that are reasonably mature today – silicon PV, solar thermal with steam turbines, demand management – have a real chance of mitigating climate change.  Photovoltaics alone could supply worldwide electricity needs if the annual production of silicon PV panels were to rise by 30% each year until 2030.

While less “sexy” than thin film approaches, silicon PV technology will win in much the same way silicon CMOS technology wins in microelectronics – despite contenders (GaAs, carbon nanotubes) trying to take over, none have succeeded. So expect significant innovations in the coming years – ranging from novel manufacturing and solar cell printing approaches like PARC’s that will allow PV deployment to be self-sustaining without subsidy in less than 10 years, to demand-side reduction strategies (LED lighting, efficient cars and appliances, smart systems) that can be implemented very quickly to cut energy use.

The best way to predict the future…