The Potential of Ridesharing to Ease Congestion

The Potential of Ridesharing to Ease Congestion 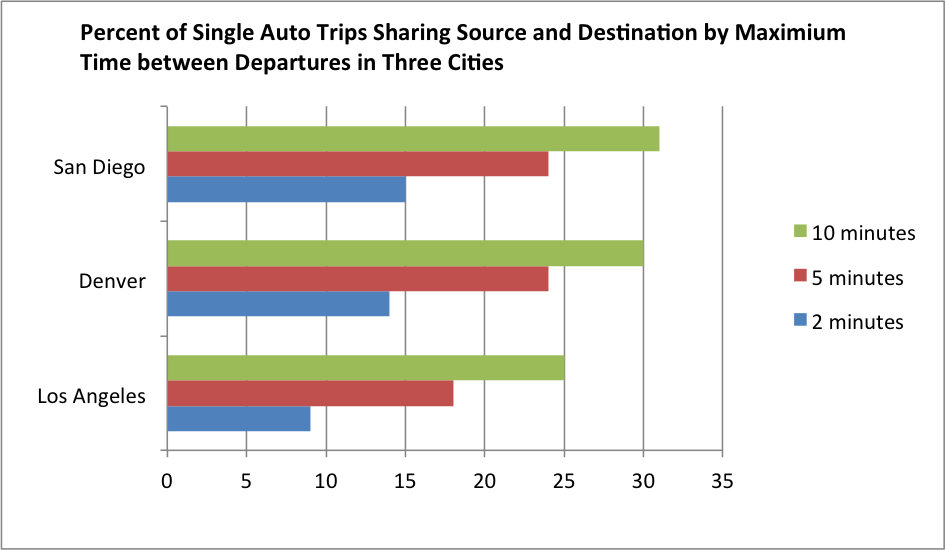 Figure 1:  Our analysis of commute flows collected by the Census Bureau indicates that US cities have significant untapped ridesharing potential.

The increasing populations of metropolitan areas are straining the transportation infrastructure in the United States. In addition to the wasting time, congestion consumes almost two billion gallons of fuel annually contributing to local air quality problems and climate change. Even in favorable fiscal environments, highway capacity improvements and transit expansions have completely failed to ease congestion.[1]

With the fiscal situation unlikely to improve, state and local governments need new ideas for dealing with congestion in the coming decades.

The prevalence of single occupant vehicles (SOV) is a major contributor to congestion. Even among people who live in cities, 72 percent of commuters travel by SOV. [2] Ridesharing (e.g., carpool or vanpool) is the most popular commute alternative to SOV representing 10% of work trips nationally. In spite of many government initiatives (e.g., high occupancy vehicle lanes, web-based carpooling matching services), this number has remained fairly constant over the past two decades. With every carpool removing at least one vehicle from the road, the benefits of ridesharing are substantial.

Why is this the case?

One possible explanation for why this number remains so low is that people do not share the similar commute patterns. Census data provides one way of exploring this explanation. They provide data at the census tract level for commuting patterns. Census tracts are geographic areas that encompass similar demographics and contain about 4,000 people. Thus, each tract is fairly small, usually less than 0.75 square miles in cities. Figure 2 illustrates two commuting flows in Denver.

Figure 2: Commuting flows from the showing the number of commuters traveling to the same census tract just north of downtown Denver from two different origin tracts.

It is reasonable to assume that people commuting between the same census tracts could carpool if they were leaving at the same time. The census includes the number of people commuting to between every pair of census tracts, the percentage of single occupant vehicles for the metropolitan area, and a distribution of departure times.

Using this information, we estimate carpool growth capacity (that is, the number of cars potentially removed from commuting) as follows. For each SOV commute, we can produce a departure time from the distribution. From this information, we can plot the potential number of cars removed against vehicle wait time to form a carpool considering different maximum sizes of the carpool. 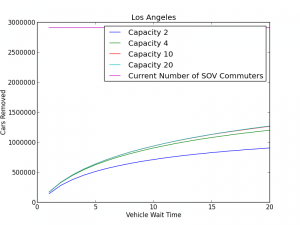 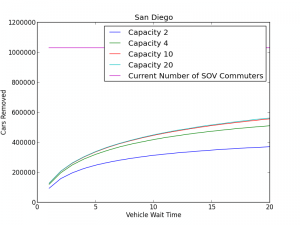 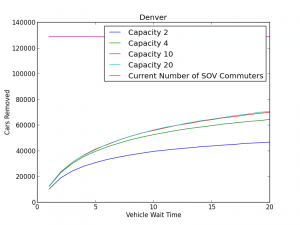 These three graphs show that there is clearly potential for increased ridesharing in counties with different population and employment patterns. Identifying pairs of people that depart within 5 minutes of each other could reduce 24% of single occupant vehicle commutes in Denver and San Diego and 18% in Los Angeles.

Increasing the carpool to more than 4 people shows little effect in our model. This is likely due to using census tracts for spatial granularity instead of some kind of travel time metric. In contrast, corporate shuttles and companies, such as, RidePal and Bridj, are running scheduled buses with greater capacity along high demand commuting corridors that are not served well by public transit. These companies are making use of fine-grained spatial information (e.g., address and GPS) and multiple stops to fill their vehicles.

One conclusion we can draw from this analysis is that people with similar jobs live in similar places with similar lifestyles. If true, we could expect similar results for non-work trips, which are also a significant contributor to congestion, to also have a capacity for ridesharing.

Given this untapped potential, what about other limiting factors?  Two possible reasons are that people (1) do not want to share space with other people, or, (2) due to irregular schedules, are unable to be matched in a static fashion. With people staying in other people’s homes through AirBNB and the overall rise of the sharing economy, it is not hard to imagine that there will be a similar shift in public opinion about sharing space on a commute. Overcoming the second possible factor requires the ability to match riders and drivers in real time. Mobile phones with location services are a key enabling technology for matching transportation consumers with providers., This understanding is likely shared by ride matching companies (e.g., Uber and Lyft) that see ridesharing as an important mechanism for decreasing the cost of their services.

It is not hard to imagine a future where you use your phone to request a ride with someone from your social network who wants to talk about last night’s football game, and within minutes, you hop into a car, van, or bus for a more enjoyable ride to work.