Beyond HCI researchers, scientists from diverse fields such as Computer-Supported Cooperative Work (CSCW), WWW research, Hypertext, Digital Libraries are feeling the impact of such systems and are publishing research papers that characterize, model, prototype, and evaluate various systems. Studies from behavioral microeconomics, organizational economics, sociology, ethnography, social network analysis, information flow analysis, political science, and conflict resolution are potentially relevant to Social Web researchers. Researchers are seeing a surge of new research on Web2.0 technologies distributed in a wide variety of disciplines and associated conferences. In this past year, I have attended conferences in these different fields to gain a sense of the horizontal effect that the Social Web is having on academic research. 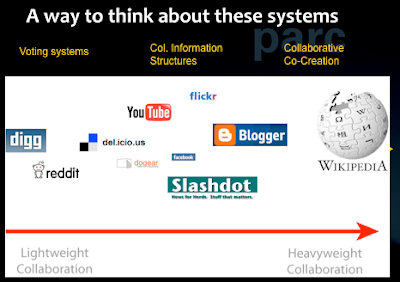 • At the light-end of collaboration spectrum, we have researchers trying to understand the micro-economics of voting systems, of individual and social information foraging behaviors, processes that govern information cascade, and wisdom-of-the-crowd effects. HCI researchers have productively studied information foraging and behavioral models in the past, and are trying to apply them in the new social context on the Web. Economists are trying to understand peer production systems, new business models, and consumption and production markets based on intrinsic motivations.

Our own research on using information theory to study global tagging trends is an example here.

• At the middle of the collaboration spectrum, researchers are building algorithms that mine new socially constructed knowledge structures and social networks. Here physicists and social scientists are using network theories and algorithms to model, mine, and understand these processes. Algorithms for identifying expertise and information brokers are being devised and tested by information scientists.

Here we have been building a system called MrTaggy that uses an algorithm called TagSearch to offer a kind of social search system based on social tagging data. I’ll blog with a screencast demo soon.

• At the heavy-end of the collaboration spectrum, the understanding of coordination and conflict costs are especially important for collaborative co-creation systems such as Wikipedia. Researchers had studied characteristics that enable groups of people to solve problems together or collaborate on scientific endeavors. Discoveries such as the identification of “invisible colleges” by Sandstrom have shown that implicit coordination can be studied and characterized.

Our research into coordination effects in Wikipedia is an example of research here.

The horizontal effect of the Social Web is changing academic research in various and important ways. The Social Web is providing a rich playground in which to understand how we can augment web users’ capacity and speed to acquire, produce, communicate, and use knowledge; and to advance collective and individual intelligence in socially mediated information environments. Augmented Social Cognition research, as explained here, emerged from a background of activities aimed at understanding and developing technologies that enhance the intelligence of users, individually and in social collectives, through socially mediated information production and use.

In part this is a natural evolution from HCI research around improving information seeking and sense making on the Web, but in part this is also a natural expansion in the scientific efforts to understand how to augment the human intellect.

The Social Web isn’t just a fad, but a fundamental transformation of the Web into a true collaborative and social platform. The research opportunity is to fully understand how to enhance the ability of a group of people to remember, think, and reason.