Think GPS Changed Everyday Life? Wait Until We Get Hyperspectral!

Think GPS Changed Everyday Life? Wait Until We Get Hyperspectral!

When technology moves from cumbersome and impractical to miniature and cost effective, the world changes.

Consider the GPS: in the late 1980s, U.S. soldiers carried GPS receivers that weighed close to 50 pounds. By 1991, these were replaced by miniature, hand-held receivers that weighed two pounds. Today, with GPS receivers standard on most mobile phones and even wristwatches, consumer GPS technology has transformed society by giving us new ways to navigate, survey, provide disaster relief, and even track our pets.

We’re blazing a similar trail with hyperspectral imaging, another technology that will revolutionize how consumers view and interact with the world.

Hyperspectral imaging allows us to see the unseen. Your eyes can only sense a small amount of the information present in the light that hits your retinas, even on a bright sunny day.  Light is actually an electromagnetic wave, but the human eye can only sense the color of light, rather than its wavelength.  However, wavelength is the more fundamental quantity, because many combinations of light with different wavelengths can appear to be the same color.  Hyperspectral cameras can directly sense the wavelengths of light in a scene, and with that information they can reveal what materials are present.

Today, industry and government organizations use hyperspectral sensors and image processing systems for applications in astronomy and planetary exploration, agriculture and food inspection, fine arts and archaeology, biomedical imaging, remote sensing, geosciences, surveillance, and security.  A hyperspectral sensor can discriminate a camouflaged target from its surroundings just as easily as it can determine if meat is spoiled. Although powerful, these systems are seldom used because they are typically bulky, they can cost tens to hundreds of thousands of dollars, and they require experts to analyze the data they generate. 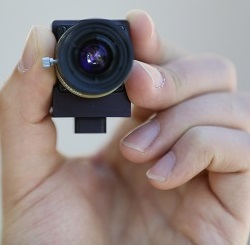 At PARC, a Xerox company, we have developed a method of hyperspectral imaging with breakthrough size and cost potential. The method is based on an elegant reversal of the operating principle of liquid crystal displays (LCDs). Our camera uses a layer of liquid crystal as thin as a human hair to encode the optical spectrum in a short movie taken by an ordinary silicon image sensor, such as one finds in cell phones and other consumer devices.  The data are then transformed into a hyperspectral image “cube”, which is a series of images, one at each wavelength.

This configuration offers several advantages over existing front-runners for low-cost hyperspectral platforms.  First, it has a significantly greater spectral bandwidth: it can sense from 400 nm to close to 1000 nm. Also, it is more flexible, as spectral resolution, spatial resolution, and imaging speed can all be traded off in software. Taken together, these two features enable a general-purpose (rather than specialty) device, the kind you might find on a general-purpose platform such as a cell phone.  Specialization for particular applications can thus come completely in the form of software.

In addition, computers are increasingly becoming the main consumers of digital images.  Machine intelligence, including deep learning, can be used to simplify the interpretation of high-dimensional hyperspectral data in a way that is actionable and valuable to humans. For more information, click here.

Alex Hegyi has always been motivated by a fundamental curiosity to understand the world and to gain deep physical insight into the nature of reality, as well as an urge to create and invent with this knowledge. MIT Technology Review included Alex on its 2016 list of Innovators Under 35. He’s also been recognized with a Fannie and John Hertz Foundation Fellowship and the 2013 Hertz Foundation Thesis Prize, awarded for a new kind of biomedical imaging, invented by Alex, that combines the spatial resolution of anatomical imaging with the sensitivity of molecular imaging.

You can find out more about our Hyperspectral Imaging technology by downloading the Information Sheet below.