Upward Tele-Mobility: How Mobile Remote Presence Robotics Can Change The Way We Work

Upward Tele-Mobility: How Mobile Remote Presence Robotics Can Change The Way We Work

Transportation is a major source of emissions that are responsible for the greenhouse gases that increase the probability of events like hurricanes Katrina, Harvey, Irma and Maria, sudden massive coral reef die-offs, and spreading desertification. Work-related travel accounts for nearly 25% of all passenger travel in the U.S. Socializing is another major contributor. Both of these purposes can be and are being partially addressed by telepresence.

Telecommuting一the ability to work remotely instead of commuting一is a popular perk that can improve productivity and aid in employee retention. It also reduces employee stress and improves employee morale. According to Global Workplace Analytics “Nearly 4 million U.S. employees worked from home at least half of the time in 2015. That represents about 3% of U.S. workforce—a 115% increase since 2005. During the same period, the non-telecommuter population grew by less than 12%.”

Remote work is possible using telephone and remote collaboration tools (such as shared folders and multi-user text and image editors like Google Docs) alone. But telecommuting is much easier to sustain over time with video-based telepresence technology. Being able to see a person’s facial expressions, gestures, and other body language through a video feed can, over time, foster trust and rapport between colleagues in a way that is not possible with just text, or even voice. Employees are handicapped at work without building this rapport. It is essential for productive collaboration, and helps managers develop good “gut feelings” about their direct reports, so that they are eager to champion their advancement in the workplace.

Many companies like Cisco and Hewlett Packard have already made significant (30-60%) reductions to their travel budgets by adopting telepresence where feasible. Apart from being good for the environment, this also cuts the costs of doing business in the form of reduced travel budgets and reduced time, effort and stress that travel imposes. Mobile telepresence also enables more frequent and less costly check-ins between remote teammates. So why is telework not universally popular in the workplace?

Recently, some corporate leaders have spoken against and tried to reverse the teleworking trend. Most notable are: Marissa Meyer, Yahoo’s former CEO who banned teleworking in 2012; the US Patent and Trademark Office (USPTO), which uncovered extensive abuse of its teleworking policy whereby 288,479 hours of employee activity appeared to be unaccounted for; Google’s CFO Patrick Pichette, who publicly frowns upon and discourages telecommuting and, most recently, IBM which has reversed course on teleworking, insisting that all (several thousand) U.S. marketing employees work at one of six locations, after doing the same for its design, security, procurement departments, much of IT, and other departments.

Clearly some businesses are responding to bad experiences with management not keeping track of what employees are up to while they are out of sight (this was very much the case at Yahoo and the USPTO). But another argument for having people be co-located is the opportunity for spontaneous, serendipitously creative interactions. Marissa Meyer and Patrick Pichette have argued that “there is something magical about spending the time together” because people are “more collaborative and innovative when they’re together.” Certainly Steve Jobs had this in mind, when he oversaw the designs of his Pixar office and the Apple “Spaceship” campus to force employees to cross each other’s paths by strategic placement of shared resources such as bathrooms and cafeterias.

But forcing employees to come into the building is much easier for companies like Google and Facebook that have top-tier applicants competing to work for them and the ready cash to cover relocation costs. For most other companies, competing for skilled workers, recruitment and retention is a different game. Sometimes the very best job candidates happen to live far away from headquarters. So, given the employee attractions and environmental arguments for teleworking, these companies must find a way get around the problems thus far associated with telework. 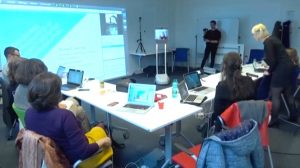 A variety of fully mobile telepresence robot products are gaining traction in the workplace. Combining telepresence with mobility opens up a new range of advantages such as: Being obviously “there” in a way that is hard to ignore, reminding those present of the remote person; Being able take part in pre- and post-meeting chit chat when attendees engage one-on-one about topics that can be equally important to the ones on the agenda; Being able to see what’s going on outside of meetings, including keeping up with project progress and who is doing what; Promenading around the building, reminding people of your existence (yes, there is some truth to Woody Allen’s famous quote from 1977; “showing up is 80% of life”); And just being able to “wander around” means you can “bump into” others and have those spontaneous interactions that Meyer and Pichette care about so much.

While mobile robots go a long way towards addressing these needs, they still have a long way to go in terms of variety and performance of available features. For example, robot navigation demands a lot of the attention that users could be devoting to looking around at what’s going on. The field of vision from a camera (even the Suitable Technology Beam robot’s 170 degrees) is much narrower than the normal human field of view if you take into account that the human eyes and head can very easily turn, giving close to 360 degrees. Microphones transmitting audio over the internet are much less able to convey subtle background noises that increase awareness of office activity. Robots do not usually come with arms so users cannot open doors or catch elevators without the assistance of others. But these are just some of the design problems that are being addressed as costs of robot components and office infrastructure to support them plummet.

Notwithstanding the challenges, it is well worth investing in an experiment with one or two telepresence robots in your business to see what they can do for you. Set up for the most popular brands is fairly simple, though someone will need to be assigned to make sure they are properly docked and in working order. At a price of about $2K per robot, most employers should be able to dip a toe into this new way of working. Not much to lose when there may be so much to gain.

UCSC’s Leila Takayama is a cognitive and social scientist, who studies human-robot interaction.