PARC is pretty international. Nestled in the quiet hills of Palo Alto, spread across three unassuming floors of lab and office, sit some of the most passionate scientists, engineers, designers and business folks in the world. And they come from near and far.

We’re fortunate at PARC to have employees from more than 25 countries.

Naturally, this includes many of the countries playing in this year’s FIFA World Cup tournament. Needless to say, it’s been an exciting, and heartbreaking, month for a lot of PARC employees.

Since the World Cup started, PARC has set up viewing areas around the building, from our auditorium to the lunch cafeteria to meeting rooms both small and large, accommodating fans of all teams, and from all departments. The tournament has always been known to bring people together, and inside this humble little Silicon Valley research center, things are no different.

“It’s fun to see everyone together, scientists from all labs, leadership, interns, business teams, sitting side by side, rooting together and against one another,” said Louise Fransson, PARC Business Analyst, Intellectual Capital Management, and a Gothenburg, Sweden native. “Sadly, Sweden lost. But we made it further than most expected, so it’s fine. As they say, ‘Ingen fara på taket’ (There’s no danger on the roof).” 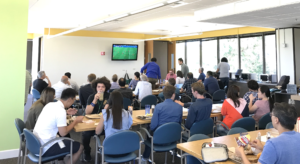 “Some fellow Iranian colleagues and I watched Iran’s Group Stage matches here at PARC,” said Amir Mirzendehdel, PARC Scientist, Computational Automation for Systems Engineering, and a Tehran, Iran native. “We usually watched in meeting rooms so we could freely shout and cheer in Farsi, which could get loud at times! I think we played well, considering the tough group we were in… Go Team Melli!”

As this year’s World Cup careens toward its poetic finale, the energy around the halls has settled. For fans at PARC and around the world, the reality of what has taken place these past few weeks is perhaps inevitably sinking in. With the final match scheduled for July 15, many colleagues here at PARC no longer have skin in the game.

Learn more about the People and Culture at PARC.